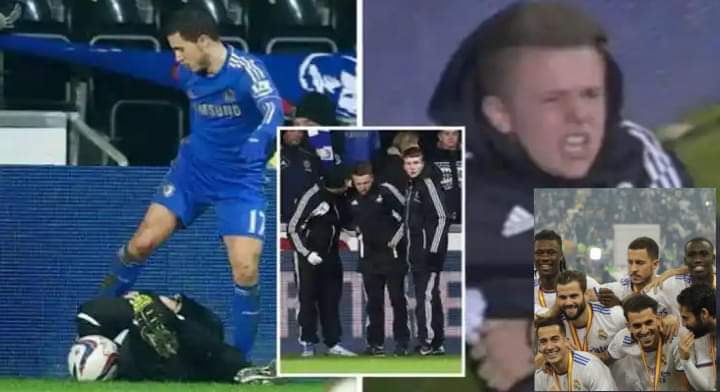 The ball boy Charlie Morgan who Eden Hazard kicked during the FA cup semi-final clash with Swansea City has been rumours to message the Belgian winger to come back to Chelsea after the incident makes him to become a noticeable person.

The Belgian winger attempted to retrieve the ball from Morgan, who had fallen on top of it, and ended up kicking the youngster in the process.

The teenager appeared to be in considerable pain as he trudged off the pitch holding his side.

“The boy put his whole body on to the ball and I was just trying to kick the ball,” Hazard insisted after the match. “I think I kicked the ball and not the boy. I apologise.”

There were 13 minutes left on the clock of the League Cup semi-final second leg when the incident occurred. Chelsea were 2-0 down from the first leg and Hazard’s red card effectively killed the tie.

Swansea went all the way in the League Cup that season, defeating League Two outfit Bradford City 5-0 in the final at Wembley.

Charlie took to Twitter in the aftermath of the incident to confirm that he would not be pressing charges against Hazard. South Wales Police also stated that no action would be taken against the former Lille star.

Hazard was spotted unhappy during their Super Cup win against Athletic Bilbao on Sunday.

Chelsea have been heavily linked with Eden Hazard return this January transfer window and as it stands it seems the Belgian international will consider Thomas Tuchel offer to return to his former club.