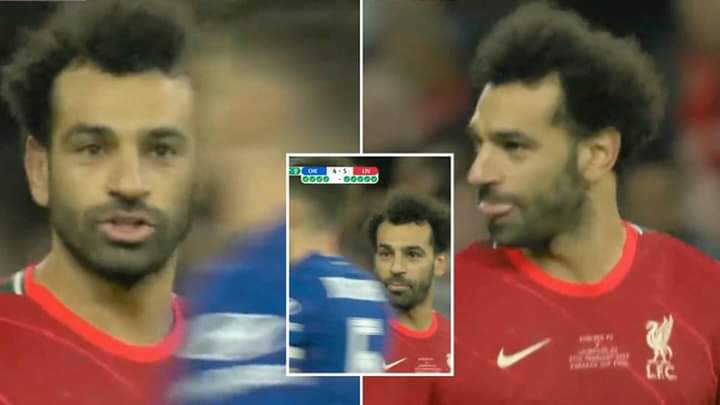 Liverpool managed to pick up their first silverware of the season in a memorable clash at Wembley.

After one of the most entertaining 0-0 draws after 120 minutes you are ever likely to see, Jurgen Klopp’s side secured a record-breaking ninth League Cup by beating Chelsea 11-10 on penalties.

The quality on show throughout yesterday’s penalty shoot-out was a joy to behold and, after the prolific Mo Salah converted his spot-kick in emphatic fashion, the Egyptian appeared to try and play some cheeky mind games.

As the cool, calm and collected Jorginho made the long walk from the halfway line at Wembley, Salah muttered something to the Italian midfielder. But what did he say?

Fans are convinced that Liverpool’s number 11 said “don’t jump” as he prepared to take the penalty. You can see the footage

below and make your own judgement.

It wasn’t enough, though. After Liverpool converted all 11 of their penalties, Chelsea shot-stopper Kepa Arrizabalaga blasted the ball into the stands and the Reds added another trophy to their already packed cabinet.

You see the full penalty shoot-out below, including the moment Salah laughed at Arrizabalaga after converting his spot-kick.

After the final whistle, Liverpool legend Jamie Carragher called himself “an idiot” for doubting a key Jurgen Klopp decision.

“Brilliant. Listen, anyone could’ve won that. It was a really tight game. The shootout, some of the penalties were absolutely out of this world and it fell to the goalkeeper,” he told Sky Sports.

“I was the idiot before the game who questioned Jurgen Klopp slightly in terms of playing Kelleher,” continued Carragher.

“He’s now the hero. When you’re getting late on in the game, who’s going to be the hero? That man is the hero. To take the last penalty to then win the cup…I mean, as I said, Chelsea played really well, Liverpool played really well. Two brilliant teams and someone’s unfortunately got to lose.”