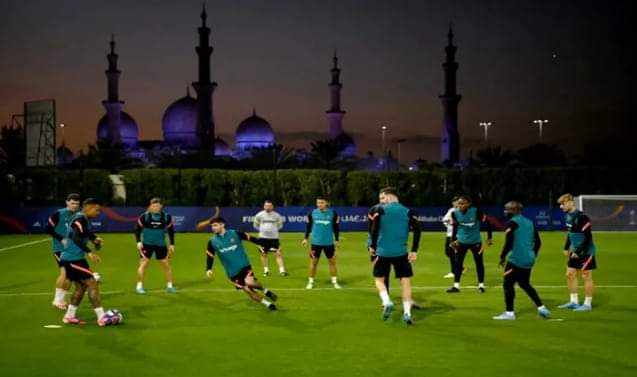 Zsolt Low has confirmed Reece James will not feature for Chelsea at the Club World Cup despite travelling to Abu Dhabi with the first-team squad while Edouard Mendy and Mason Mount are doubts to feature in tomorrow’s semi-final against Al Hilal.

James was a surprise inclusion in the group that flew out to the UAE on Saturday; the 22-year-old is currently recovering from a torn hamstring and was ruled out of the trip by Thomas Tuchel last Friday.

However, a late decision was taken for James to continue his comeback in warmer climates and he has been undertaking individual work away from the squad over the past three days.

Mendy, meanwhile, is not with the squad due to his involvement at the African Cup of Nations. The goalkeeper helped Senegal win the competition on Sunday for the first time in the country’s history and has spent much of the previous 24 hours celebrating with his teammates in Dakar.

Chelsea’s first-choice goalkeeper will not join up with the Blues first-team squad until later today (at the earliest) and that will mean a late decision is required as to whether Kepa Arrizabalaga continues in goal.

“Mendy will arrive probably later today or tomorrow and we’ll see how tired he is,” Low, who was standing in for the absent Tuchel after the German’s positive Covid test, said during Chelsea’s pre-match press conference.

“He has to arrive first, we have to check him and talk to him. We’ll see if it’s possible he plays, maybe.

“We have two amazing goalkeepers. Mendy had a fantastic performance to win the Africa Cup of Nations and be the best goalkeeper, but Kepa does an amazing job with us here.

“In the last game, he saved an important penalty and is in good shape. We’ll have talks with the goalkeeping coaches before deciding.”

On James, Low added: “No chance Reece will play in the cup. He’s in a good way but will miss still some days. He wants to enjoy the group again.”

Another doubt for tomorrow’s clash is Mason Mount. The academy graduate was brought off against Plymouth with a knock on Saturday but returned to light training yesterday.

But a late call will need to be made by Low and the Chelsea coaching staff as to whether the midfielder is fit enough to feature.

“Mason is getting better and better,” he said. “We’ll see how he moves and feels today and take the last decision tomorrow.

“We had a hard cup game with 120 minutes and a long trip here. We have to use the first two days to recover and slowly today we are prepared for a good session and game.

“The four-hour time difference, players couldn’t sleep very well, they need this time to play the game. We have the same possibility as Al Hilal tomorrow.”