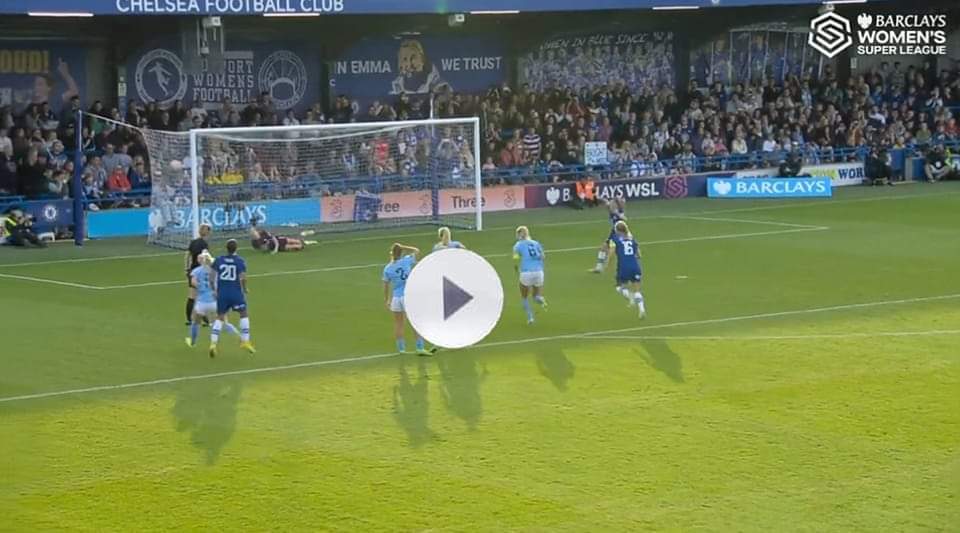 Chelsea bounced back from their opening-day defeat with victory over rivals Manchester City, who remain winless this season.

Fran Kirby poked home Guro Reiten’s low cross after a pacey Chelsea counter-attack to open the scoring, much to the delight of a packed Kingsmeadow.

City had the better of the defending champions for large spells but some sloppy defending let them down.

England midfielder Kirby has been involved in 34 goals in her past 20 WSL appearances, scoring 21 goals and providing 13 assists.

Fan favourite Kirby will surely have again impressed England manager Sarina Wiegman, who was watching on from the stands, but fellow Lionesses Lauren Hemp and Chloe Kelly struggled to assert themselves with many of City’s opportunities coming through Khadija Shaw.

Striker Shaw was lively, shooting from long range and asserting her dominance in the air, while Chelsea goalkeeper Ann-Katrin Berger, making her first appearance since having treatment for a recurrence of thyroid cancer, was kept busy by Laura Coombs.

Chelsea’s Lauren James could well have caught the eye of Wiegman, too, putting on an impressive display after many predicted she would be the breakout star of the season.

City were dominant for much of the first half but some messy defending allowed Kirby to score the opener with the timing of the goal, shortly before the break, hurting the visitors.

In the second half it was Chelsea who were in the ascendancy – James drove into the box from just beyond the halfway line and saw her shot well saved by Ellie Roebuck while Kirby had a similar chance to double the lead but shot over the bar.

Leila Ouahabi’s handball, which led to the penalty, might have been soft but was a just reward for Chelsea’s second-half dominance.

The hosts have now not lost to City in 11 WSL matches, winning five and drawing six.

Chelsea show why they are defending champions
Following Chelsea’s 2-1 defeat by promoted Liverpool in their season opener, manager Emma Hayes said that her side “couldn’t hit a barn door”.

They again squandered chances in the first half. Sam Kerr should have scored in the opening minute but poked Kirby’s cut-back just wide.

Then, when Kerr latched on to Steph Houghton’s loose pass back to Roebuck, Chelsea looked certain to break the deadlock. However, the chance was missed when Kerr passed to Kirby instead of shooting herself and the England midfielder could not get a shot away.

When Kirby did score it was largely against the run of play. City had played mostly for the previous 10 minutes in Chelsea’s half and had 12 shots to their opponent’s five, but the champions’ clinical passing and speed on the break means you can never rule them out of a game.