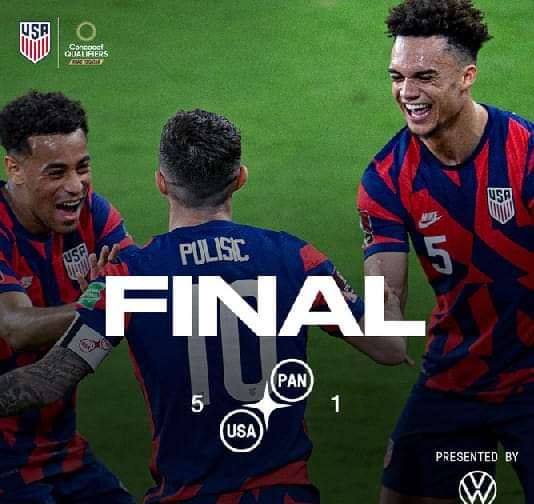 Christian Pulisic helped the United States (U.S) take an emphatic step towards booking their place at the 2022 FIFA World Cup in Qatar, scoring a hat-trick in a 5-1 hammering of Panama at the Exploria Stadium. Gregg Berhalter’s men extended their formidable unbeaten record in front of their own supporters to 21 matches across all competitions in the process.

Costa Rica’s victory over El Salvador put the pressure on the U.S to pick up all three points against Panama, and the Stars and Stripes’ task was made far easier as, on the quarter-hour mark, VAR recommended referee Iván Barton consult the on-pitch monitor after a suspected foul on Walker Zimmerman by Aníbal Godoy. After Barton had awarded the penalty, Pulisic confidently stepped up to send Luis Mejía the wrong way and give his side an early advantage.

Panama were left in further disarray six minutes later when Paul Arriola, recalled to the U.S starting line-up, rose above the ‘Los Canaleros’ defence to connect with Antonee Robinson’s enticing cross and double his side’s lead. The ruthless hosts were not finished there, as Jesús Ferreira made the most of further uncertainty amid the visitors’ defence in the 27th minute, stroking the ball past Mejía from close-range to bookend a catastrophic ten minutes for the visitors.

Panama and Godoy’s night went from bad to worse in the fourth minute of added time in the first half, when the captain gave away another spot-kick. Having already beaten Mejía from 12 yards once, Pulisic did so again with ease.

Looking to continue where they had left off, the hosts should have further compounded Panama’s misery in the opening moments of the second period, but substitute Giovanni Reyna fired wide of the left-hand post. Nevertheless, the talismanic Pulisic completed his hat-trick in the 65th minute, exquisitely taking control of the ball outside of the penalty area before striking an unrelenting effort into the bottom corner. Panama grabbed a consolation four minutes from time, when Godoy headed past Steffen.

Barring a spectacular turn of events during the last matchday of 2022 CONCACAF FIFA World Cup Qualification, the U.S will take their place in the draw for the finals group stages on April 1 in Doha. Meanwhile, Panama’s slim hopes of participating in only their second-ever World Cup were brought to an abrupt end in Orlando