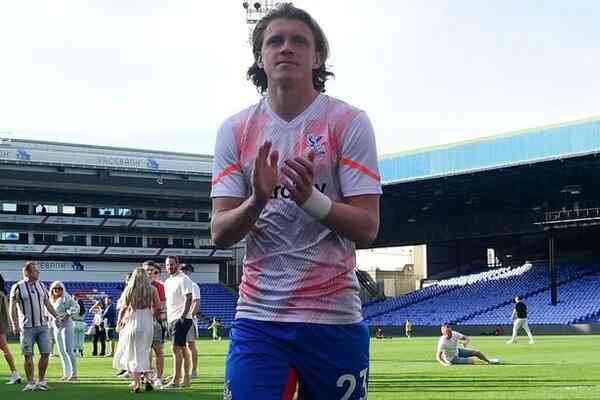 Conor Gallagher says he felt ‘at home’ at Crystal Palace while on loan from Chelsea this season and will cherish his memories of playing for the Eagles.

The 22-year-old made his final appearance in red and blue during Palace’s 1-0 win over Manchester United at Selhurst Park on Sunday, ending his time in SE25 with eight goals from 39 appearances. A huge fan favourite, Gallagher’s form from midfield earned him his first England senior call-ups and saw him voted the club’s player of the season last month by supporters.

Palace chairman Steve Parish and manager Patrick Vieira have already made it clear they’d like to strike a deal with Chelsea to allow Gallagher to return to Selhurst Park next season in some capacity, though the ball is firmly in the Blues’ court. But while talk of his future has been incessant, Gallagher himself has focused on celebrating the season in which he has truly come of age in the top level of the game.

“It’s been unreal – I’ve loved every minute of it,” he said on the Selhurst Park pitch while surrounded by his teammates and their friends and families. “Of course, there’s been ups and downs, but I’ve developed a lot as a player and as a person. I can’t thank the Palace fans enough and obviously the players at Palace. It’s just been brilliant and I’ve just felt at home since the very first day.

“I’m speechless just because I’ve loved it so much,” he added. “It’s just going to be a great memory and I’m so happy that I was able to play for Palace this season, I’ve just loved it. It was a great performance to end the season. I’m buzzing that we got the win. It was brilliant for the fans and it just seals off a great season for Palace.”

Vieira was asked about Gallagher during his post-match press conference following the victory over United and talked up the impact he’d had on the dressing room and within the club over the last year.

“The fans love him, I love him and the players in the dressing room respect and love him,” said the Frenchman. “I think it was a really good season for Conor. I think what makes us proud as a team and as a football club is that he spent a year with us and he’s leaving this football club as a really different player. He’s an international player now. We played our part in that.

“It’s a win-win,” he added. “And now the decision is in his hands and with Chelsea. We are really pleased and happy with the year he spent with us and we wish him good luck and all the best. We will keep following him and we will have to wait and see what is going to happen.”