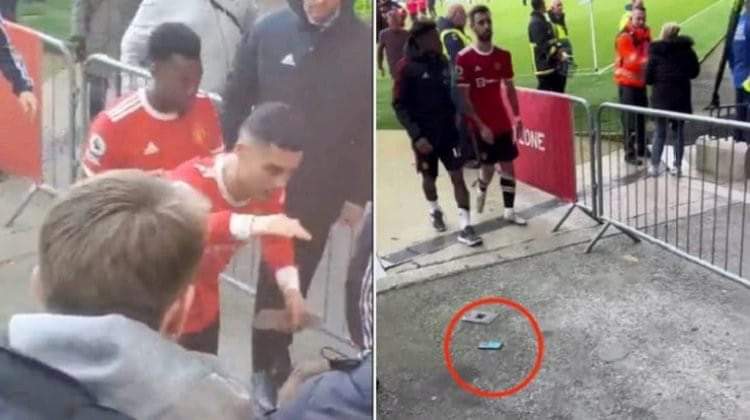 Cristiano Ronaldo will face FA hearing as the football body looks into the Manchester United’s star’s improper conduct to a fan.

According to reports, Cristiano Ronaldo has addressed the Football Association’s allegation that he violated regulation E3, which deals with improper and/or aggressive conduct.

It has to do with something that happened following United’s Premier League loss to Everton in April.

As he made his way to the locker room, Ronaldo was caught on camera attempting to knock a phone out of an Everton supporter’s hand.

It is unknown if Ronaldo has admitted guilt, but given that the 37-year-old received a police warning in August and apologized to the young fan right away after the event, it is the most likely outcome. Ronaldo is expected to argue that the incident was caused by mitigating circumstances.

United’s chances of making the Champions League cut were severely damaged by their Premier League loss against Everton, and they went on to finish sixth.

After the incident, Cristiano Ronaldo wrote on Instagram that it was “never easy to deal with emotions in difficult moments such as the one we are facing”.

Ronaldo continued: “Nevertheless, we always have to be respectful, patient and set the example for all the youngsters who love the beautiful game.

“However, we must constantly show courtesy, patience, and leadership for all the young people who enjoy the beautiful game.

“I would like to apologise for my outburst and, if possible, I would like to invite this supporter to watch a game at Old Trafford as a sign of fair play and sportsmanship.”

Despite Ronaldo’s apology, the FA insisted that the case must be heard and witnesses “may be permitted to provide written testimony.”

What Did Cristiano Ronaldo Do?

When Ronaldo was heading to the tunnel following his team’s loss, 14-year-old Jacob, an autistic Everton fan, tried to take a picture of him. Jacob’s phone was smashed out of his hands by the Portuguese forward, much to his shock, leaving him with a broken phone and bruised hand.

The 37-year-old apologized for his actions on social media and offered to invite the supporter to a United game.

The Everton fan’s mother, however, afterwards provided the media with her family’s version of the story, claiming that Ronaldo’s actions constituted a “attack” on her teenage son.

After Everton’s 1-0 victory over the Red Devils at Goodison Park, footage of Ronaldo knocking the apparatus to the ground started to go viral.

What Did The Fan’s Mother Say?

A young supporter was filming a cut on Ronaldo’s leg with his phone as he stepped out of the tunnel.

“At full-time the Man Utd players started walking off. We were in the Park End so we were right by the tunnel where they came walking past — my son was there videoing them all,” Sarah Kelly, the mother of 14-year-old Jake Harding, told the Liverpool Echo.

“Ronaldo then just walked past, with a terrible, terrible temper and smashed the phone out of my son’s hand and carried on walking.”

Kelly sent pictures to the Echo that showed her son’s hand had a bruise. She stated that she was “shook up” by the occurrence and that her kid, who was attending his first football game, was “in full astonishment.”