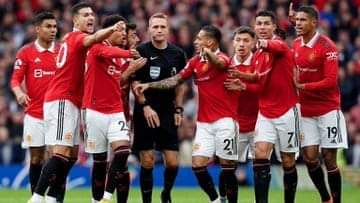 Cristiano Ronaldo thought he had opened the scoring after the half-time break
But Craig Pawson ruled the goal out, deeming the ball was not in play at the time

Furious United stars surrounded Pawson after Ronaldo’s opener was disallowed
Manchester United have been charged by the FA for failing to control their players after referee Craig Pawson was surrounded for disallowing a Cristiano Ronaldo goal in Sunday’s draw with Newcastle.

Pawson included the incident in his report and the FA announced on Tuesday that United have been charged for failure ‘to ensure its players conducted themselves in an orderly fashion in the 49th minutes of this match’. United have until Thursday to respond.

Ronaldo, who last week accepted an FA misconduct charge, thought he had scored when he took the ball away from Nick Pope as the Newcastle goalkeeper prepared to take a free kick, and scored in an empty net.

Ronaldo thought Fabian Schar had already taken the free kick and passed to Pope so the ball was live. However, Pawson agreed with Newcastle that Pope had yet to take it.

Ronaldo led the appeals to Pawson as his teammates surrounded the referee. United manager Erik ten Hag could barely conceal his anger over the incident afterwards, and confronted the match officials after the final whistle to complain.