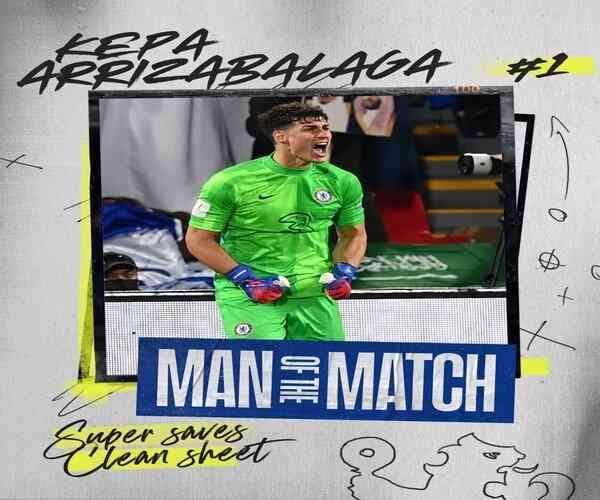 Chelsea first choice goalkeeper Kepa Arreizabalaga has win the MOTM (Man Of The Match) in their club world cup semi-final 1-0 win over Al Hilal on Wednesday.

Kepa who spotted with a brilliant save in the second half of the club world cup semi-final game yesterday to denied Morenga from scoring.

‘He’s not losing that spot just because Mendy is back!’: Chelsea fans hail the resurgent Kepa Arrizabalaga’s ‘magical’ display in their Club World Cup victory over Al-Hilal as they back him to keep the No 1 shirt for Saturday’s final in Abu Dhabi

Fans on social media have been sent into a frenzy following Kepa Arrizabalaga’s heroics for Chelsea during their 1-0 victory over Al-Hilal.

The Blues faced the Saudi side in their Club World Cup semi-final game, where Arrizabalaga put in an inspired performance to ensure his side qualified for the upcoming final.

Fans were quick to turn to social media and praise the Spaniard, with some fans questioning whether Edouard Mendy would retake his first-team place with Arrizabalaga being in fine form.

Arrizabalaga drew an immense amount of praise on Twitter, with users claiming that the Blues would not have won the match without the 27-year-old.

@OopsMpho wrote: ‘Kepa working overtime, he’s not losing that spot because number 1 is back’ in reference to the returning Mendy.

Another used said: ‘If not for Kepa’s magic, Chelsea’s lead would be gone already.’

‘Kepa has been different class since Mendy joined’, wrote @BeardedBlue20.

One fan claimed that the Spaniard ‘deserves some praise’ and is ‘continuing to look very solid and confident’.

Thomas Tuchel is set to have a selection dilemma on his hands when Mendy returns from his recent success at the Africa Cup of Nations.

Clearly according to the Chelsea fanbase, Mendy might have to prove his worth again if he is to take the starting goalkeeper position.

Romelu Lukaku’s first half strike from close range was enough to secure a 1-0 victory, which the Blues rarely looked like losing, as they set up a final against Brazilian side Palmeiras on Saturday.

With Thomas Tuchel unavailable due to a positive Covid test, assistant Zsolt Low took charge and oversaw a dominant display from the Champions League winners, even if his side failed to convert a number of chances.