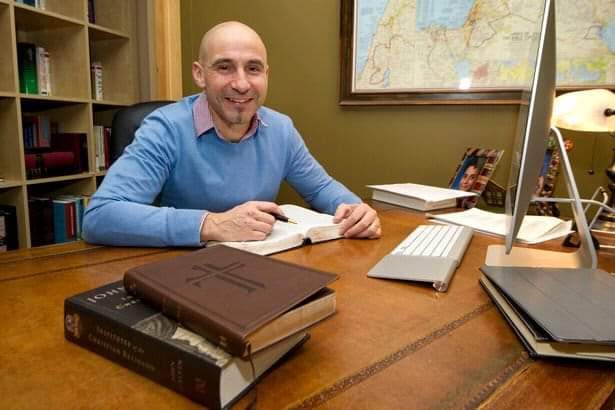 Former Chelsea and Newcastle United ace Gavin Peacock enjoyed a profitable football career and a steady punditry role with the BBC, only to overhaul his life and become a pastor

He drove a nice car and occupied a regular spot on the sofas of Football Focus and Match of the Day.

Yet former Chelsea and Newcastle United star Gavin Peacock still felt there was something missing.

Perhaps it was the thrill of playing in front of a 100,000 strong Wembley crowd in the 1994 FA Cup final. Maybe it was the irreplaceable day-to-day dressing room culture all footballers fall in love with?

Whatever it was, it was missing, and Peacock found himself “in need of a saviour”.

A flight to Calgary, and many years off studying later, Peacock overhauled his life, left the BBC sofas for good, and embarked on a spiritually fulfilling quest as a pastor.

While the transition from expert football pundit to full-time pastor is one very rarely trod in the hustle and bustle of the footballing world, God has never been too far away from Peacock’s mind.

During his early footballing years surging through the ranks of Queens Park Rangers, Peacock regularly joined his mother at church.

Soon after, he was invited to the preacher’s house for a meeting alongside several other youngsters who also went to the same church as Peacock and his mother.

HAVE YOUR SAY! What other players can you think of who swapped football for something completely different? Comment below

“I walked in as someone who, supposedly for my age, had ­everything – money in my pocket and a ­fantastic career,” Peackock explained.

“I had a nice car – everything most of the world deems as success. But inside I was in ­turmoil. There was something missing. They started talking about Jesus Christ and to pray.

“My eyes were opened. I ­realised I was in need of a ­saviour. From then on I was able to continue with my career, having the right perspective with God and football.”

In the space of 18 years, Peacock has swapped the shadow of the Wembley Towers to that of the Rocky Mountains in Canada.

4500 miles away from the spiritual home of English football, Peacock has traded the eyes of 100,000 spectators to those of a quaint congregation of 15 people.

“I suddenly felt compelled to do it, I had the urge to preach,” Peacock added.

“I wanted to learn away from the public gaze in ­England. We were cut off from the football world and it was a testing time.

“I was more nervous making my preaching debut in front of around 15 people on a Sunday evening than playing in front of 100,000 at Wembley.”

Fortunately for the former Chelsea ace, who also helped Kevin Keegan’s Newcastle United side gain promotion to the Premier League, his experience preaching was far better than his FA Cup final.

He added: “I’d scored both goals in the semi-final over Luton and we started brightly in the final. I hit the bar when it was 0-0.

“But they were great days for me at Chelsea playing with Ruud Gullit, Mark Hughes, ­Gianluca Vialli, ­Gianfranco Zola. But even better was Glenn Hoddle, the ­manager.”

While the Englishman is now conducting sermons and prayers instead of the midfield, football is never too far away from the forefront of his mind.

“Football sometimes slips into my ­sermons. It’s never far away and I keep in touch with the Premier League on TV. At times, I miss it but one of the pleasures of being a pastor is getting to deal with people,” said Peacock.

“My kids sometimes go on ­YouTube to watch some of the old games. They were good times… but so are these.”