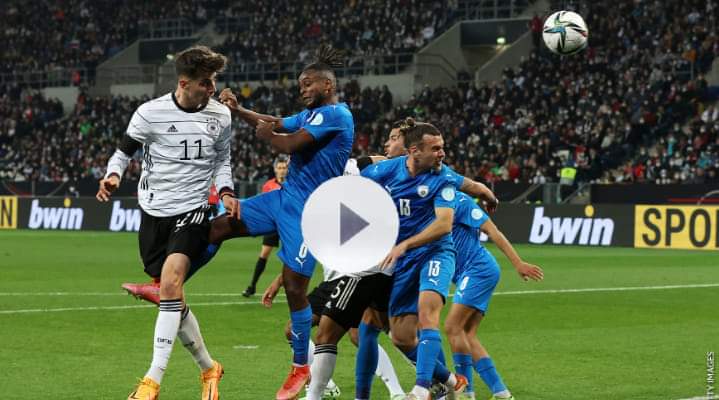 Germany made it eight wins on the spin as goals from Kai Havertz and Timo Werner sealed a 2-0 friendly win over Israel at the PreZero Arena on Saturday.

Die Mannschaft rounded off their World Cup qualifying campaign with a 4-1 victory over Armenia in November, and they picked up where they left off against Gadi Brumer’s side in Sinsheim.

Havertz gave them a 36th-minute lead with a smart near-post header, before Timo Werner’s 22nd international goal on the stroke of half-time ensured they had a healthy advantage at the interval.

Hansi Flick’s side were content to play out the second period at a more pedestrian pace, although there was late drama as Thomas Muller and Yonatan Cohen exchanged penalty misses.

Despite Germany’s dominant start, they did not carve out a shot on target until the 29th minute when Ofir Marciano got down well to repel Havertz’s effort, with Julian Draxler prodding the rebound into the side netting.

Ilkay Gundogan curled straight at Marciano from a promising position soon after, before the Israel goalkeeper raced off his line to deny a clean-through Havertz.

The Chelsea forward was not to be denied from David Raum’s resulting corner, however, heading home his eighth international goal from inside the six-yard box.

The hosts doubled their advantage in first-half stoppage time through an unmarked Werner steering in Gundogan’s indirect free-kick at the near post.

Only a superb Marciano save denied Thilo Kehrer a third on the hour mark as Germany continued to dominate after the break.

Muller fluffed his lines from 12 yards in the 89th minute after Lukas Nmecha had been brought down inside the area, while Cohen saw his spot-kick saved by Kevin Trapp after he had been tripped by Nico Schlotterbeck.

What does it mean? Flick’s men shaping up nicely for Qatar

Germany were utterly dominant throughout, yet Flick will not get carried away given Israel are a whopping 66 places beneath them in FIFA’s world rankings.

Still, this was further proof that Die Mannschaft are in rude health and will be a force to be reckoned with at the World Cup in Qatar later this year.

He was less threatening after the interval, yet Havertz was comfortably Germany’s brightest spark. The 22-year-old had a game-high five shots, while no player on the pitch made more key passes (four).

Hoffenheim striker Munas Dabbur scarcely had a look in at the stadium where he plays his club football, with the isolated frontman substituted in the 74th minute having had just a single shot.

Both sides are in friendly action again on Tuesday, with Germany travelling to Netherlands and Israel hosting Romania.