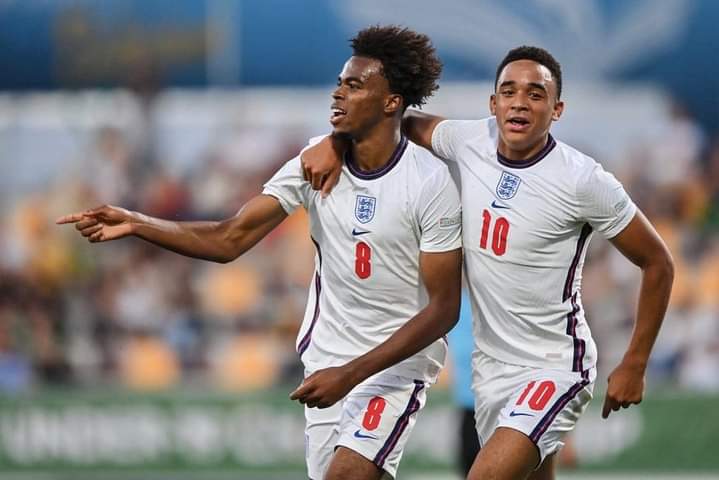 English Premier League giant, Chelsea FC new boy and summer signing Carney Chukwuemeka was superbly incredible yesterday for England U-20 team under the tutelage of Coach Ian Foster in an international friendly against Morocco U-20.

The 18 year old former Aston Villa star retained his spot in his team’s starting XI line-up having been a key figure in the squad since making his debut as a prospect for the Three Lions and he was able to deliver at the peak. Carney Chukwuemeka was astonishing with top notch control at the heart of the centre-field where he played more of the offensive role thereby helped in advancing the ball upfront which got his side created a couple of chances in the opposition box.

Charlie Patino in the 27th minute of the game opened the scoring sheet for England thereby giving them the lead to make it one nil which was the only goal that separated the two sides going into the half time break. The host in the second half were more dominating as they put up some more dazzling displays and as such got their lead doubled in the 56th minute with a goal from Tim Iroegbunam to make it two goals to nil, before the visitor got the deficit reduced in the 70th minute as they put one back with a goal from Anderahmane Soussi to make it two goals to one.

After every other attempts from both sides to add more to the tally of the night, all were not successful as it ended two goals to one at full time.

Carney Chukwuemeka with his brilliant displays in the game will be hoping to keep the tempo and momentum going for the Blues after the international break.