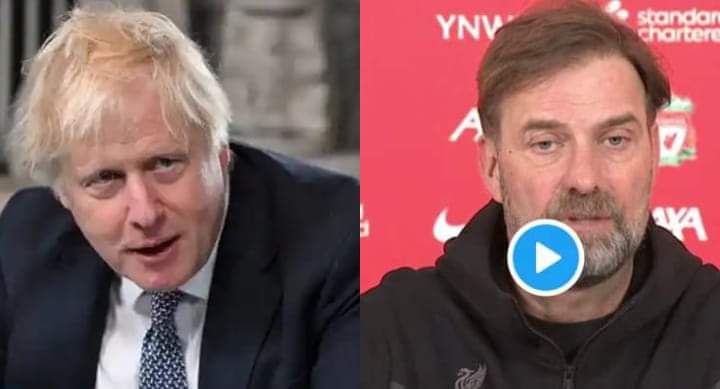 UK Prime Minister, Boris Johnson, has hit back at Liverpool manager, Jurgen Klopp, for his remarks about the Reds’ fans booing the national anthem.

Before Liverpool’s FA Cup final win over Chelsea at Wembley on Saturday, the Reds’ supporters jeered Prince Williams, Duke of Cambridge, as he shook hands with the players.

The fans later booed the English national anthem, ‘God Save the Queen’, along with the traditional Christian hymn ‘Abide with Me’.

However, Klopp had no worries about the supporters who were involved.

The German gaffer said, as reported by the Express: “The majority of our support are wonderful people. They would not do it if there was no reason. I have not been here long enough to understand the reason for it – it’s for sure something historical – and that’s probably questions you can answer much better than I could ever. They would not do it without reason.”

But Johnson, via his spokesperson, was quick to rubbish Klopp’s comments, insisting that there is no reason to boo the national anthem, adding that it was a great shame.

The official spokesperson was quoted by Sportskeeda as saying: “Obviously what happened over the weekend, it was a great shame that as we were marking 150 years of the FA Cup bringing people together, a small minority chose to act like that.”