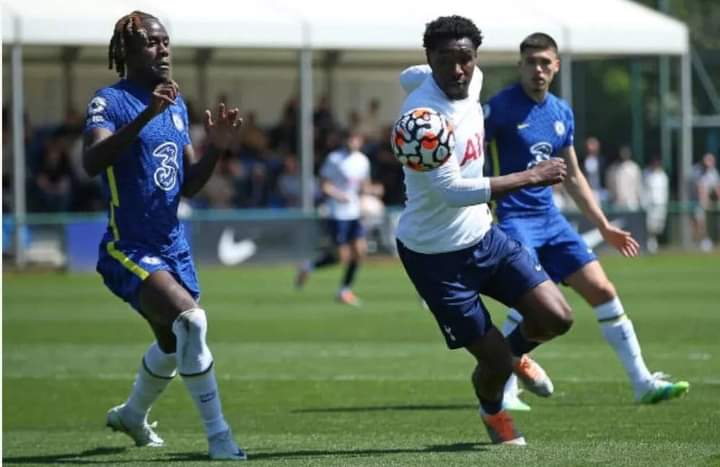 A handful of Chelsea stars — old and new — were in attendance at Cobham training ground for the Development Squad’s final Premier League 2 game of the season. Andy Myers’ side needed a win against Tottenham to evade relegation from the under-23s top-flight, and the Blues did so in the dying embers.

As first reported, Trevoh Chalobah and Malang Sarr were named in the starting eleven in a bid to bolster the west London side’s efforts. Kion Etete put the visitors ahead moments before the hour-mark, and as the tie went on, Chelsea looked destined to seal their fate.

But, all of a sudden, from the depths of despair, the Blues rose like a phoenix from the ashes and clambered ahead. Dion Rankine levelled proceedings inside the final ten minutes before Joe Haigh finally steered Myers’ side to safety after bundling the ball into the net.

The tie was an incredible spectacle, and several star-studded Chelsea greats were pitchside to offer their support. According to the reputable @ChelseaYouth, Mason Mount, Reece James, Timo Werner, and Kai Havertz represented the first team’s support.

John Terry and Claude Makelele were also in attendance to offer their support, the former of whom is a coaching consultant at the Chelsea Academy, contributing to coaching discussions, mentoring academy players, and supporting parent dialogue.

The former Blues captain acts as a figure for aspiring graduates to look up to and use as a beacon of guidance. Following the announcement of his appointment in the new role, Terry took to Twitter to express his thoughts at what is sure to be an emotional reunion.

He wrote: “I’m delighted to announce that I’m coming home and have taken up a consultancy role @ChelseaFC academy. As well as delivering on-field coaching sessions, I will be involved in coaching discussions and mentoring our academy players.”

Whilst not in an official managerial role, Terry is the latest in a number of former players to have returned to the club to offer their expertise. The likes of Carlo Cudicini, Petr Cech and Claude Makelele all held various roles at Stamford Bridge at the time of writing, while Frank Lampard also, of course, was appointed as manager before being replaced by Thomas Tuchel.