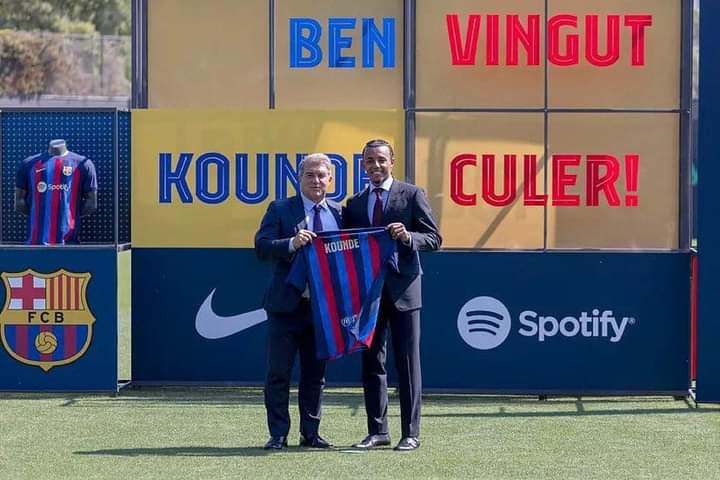 Jules Kounde has said that he chose Barcelona over Chelsea because of the ambitious project that they have in place at the Camp Nou, where he is one of many players to have joined this summer.

The central defender signed for Barcelona last week after being pursued by a number of teams, most of all Premier League side Chelsea.

Barcelona have paid a reported fee of 50 million euros to Sevilla for the French defender who has been a standout performer for some time in the Andalusian side.

Speaking during his press conference, Kounde admitted that Chelsea was a genuine option.

“I had the chance to go to Chelsea, but I chose Barcelona because they have an ambitious project,” he said.

“I waited for Barcelona‘s agreement with Sevilla.

“I like playing in LaLiga and having played here for a while will make it easier for me, but you have to adapt to Barcelona‘s style”.

He also made a commitment to try and speak Catalan in the next few months which will certainly endear him to the fans.

“I am very happy and proud to come to this club, I am very grateful to the president, to the fans,” he said.

“They have shown me a lot of affection. All I have to do is train hard and win, of course.

“I will also try to speak Catalan in a few months.”

Xavi’s role in bringing Kounde to Barcelona
It seems that another factor in choosing Barcelona was the conversation that Kounde had with head coach Xavi Hernandez.

“I spoke with Xavi, the conversations were fluid,” the defender revealed.

“I felt his affection, he really wanted me to come, and this is important for me.

“He has asked me to do what I did at Sevilla, to bring the ball forward, to be aggressive.”