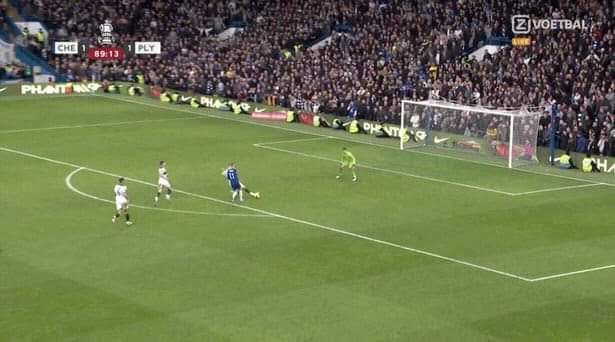 Chelsea progressed into the fifth round of the FA Cup thanks to an extra-time winner by Marcos Alonso, and the Blues’ forwards, again, failed to impress against lesser opposition

Chelsea progressed into the fifth round of the FA Cup by beating Plymouth Argyle 2-1 after extra time on Saturday, though it highlighted the fractions amongst the Blues squad.

Romelu Lukaku and Timo Werner both disappointed against the League 1 outfit, and an incident in the 89th minute whilst the sides were level highlighted how neither player are anywhere near their best at the moment.

On the counter-attack, Lukaku received the ball 40 yards from goal and played a pass in behind the last Plymouth defender to put Werner one on one with goalkeeper Michael Cooper.

But rather than racing on to the pass, the former RB Leipzig star looked reluctant to control the pass and instead pulled out of taking his first touch, allowing Plymouth defender James Wilson to slide in and intercept.

Lukaku was understandably livid with his teammate as it could have cost Chelsea the game, though a 115th minute from Marcos Alonso ensured that that wouldn’t be the case.

Journalist Miguel Delaney wrote on Twitter: “Lukaku furious after a strange moment where he is on, plays in Werner with a superb through ball, only for Werner to weirdly back out and allow Wilson to get across and clear.”

In response to a video of the bizarre incident, one Blues fan wrote: “This is £272,000 -per-week of commitment, by the way. Embarrassing.”

Whilst another added: “I don’t get why he slowed down. He has all the advantage. Would be a likely penalty kick in the dying embers of the game. Very tactically/technically inept player.

However, fans were actually divided by who was at fault for the move breaking down, with Lukaku’s pass raising questions. The former Inter Milan’s pass was marginally overhit and wasn’t directly into Werner’s pass.

One supporter said: “If you’re blaming Werner for slowing down, you’ve never played football in your life. That pass is genuinely one of the most horrific I’ve seen in my life. Guy actually played it curling inside towards the opposition defenders, play it on the outside and it’s all Wener…”

Another said: “This is Lukaku’s fault but it doesn’t matter, we need Broja to replace both next season.”

Thomas Tuchel’s side now travel to the FIFA Club World Cup, and the trip out of England against some lesser opposition may be just what the Blues need.