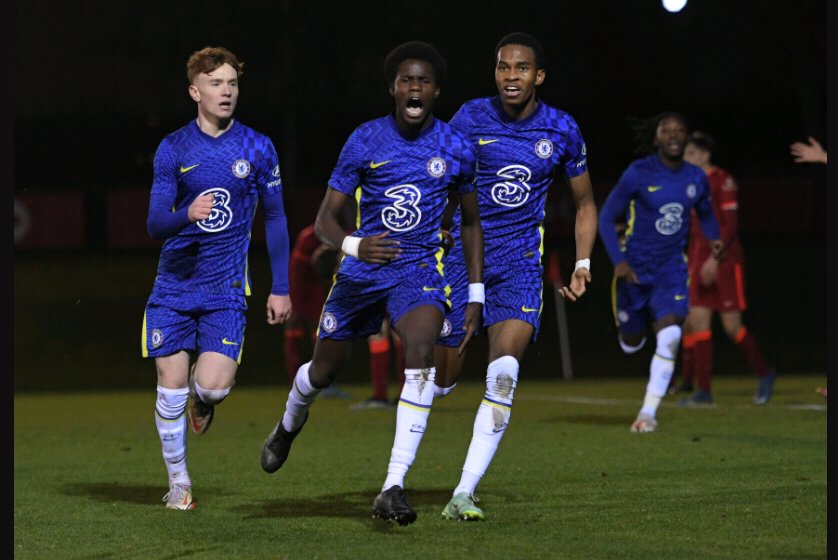 The Nigeria-born striker scored twice, Silko Thomas, Ronnie Stutter and Josh Tobin were the other scorers in Saturday’s victory

The Young Blues have comfortably secured their spot in the final of the Under-18 Premier League Cup as they beat Stoke City 5-1 on Saturday afternoon.

The Chelsea U-18s edged the early moments of the half without creating a clear-cut opportunity, nonetheless, the lads nullified the threats of their opponents.

The endeavour and sustained pressure by the Young Blues were rewarded as some great work on the left from Thomas led to a dangerous cross into the box which found the head of Zain Silcott-Duberry.

He cushioned a header to Mendel-Idowu who was on hand to nod home for the opening goal.

Despite missing some gilt-edged chances, the Chelsea U-18s got a deserved second goal to give themselves a two-goal cushion.

After a long stoppage in play due to injury, the Young Blues restarted play quicker than their opponents.

A Thomas and Mendel-Idowu combination found Leo Castledine, he dinked in behind the Stoke defence and Stutter beat the keeper to the ball to increase his side’s lead.

On 57 minutes, Jack Griffiths gave Stoke City hope when he pulled a goal back, only for Thomas to restore the two-goal lead in the 72nd minute.

When Billy Gee’s effort was saved by the Stoke City goalkeeper, Mendel-Idowu was there to poke home the rebound to make it 4-1 before Joshua Tobin completed the scoring in stoppage time.

The 17-year-old Anglo-Nigerian has tallied seven goals in all competitions for Chelsea U18s so far this season comprising four in the U18 Premier League, one in the FA Youth Cup and two in the Premier League Cup.

Chelsea will now await for the winners of Leicester City and Fulham to know their opponents in the final.