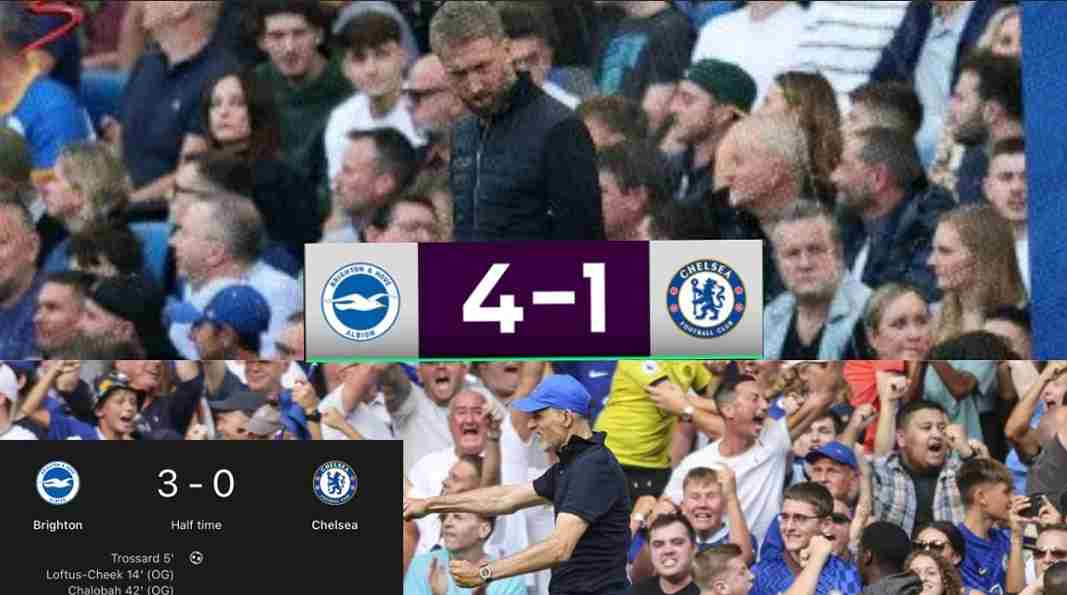 BRIGHTON thumped Chelsea 4-1 at the Amex Stadium as the Blues suffered a first defeat under new manager Graham Potter.

Things then went from bad to worse before the break as Pervis Estupinan’s cross forced another own goal – this time from Trevoh Chalobah.

Kai Havertz pulled one back for the visitors at the start of the second half, but it proved to be merely a consolation as Pascal GroB tucked home in stoppage-time to hand Brighton a sensational victory.

The result is Potter’s first defeat as Chelsea manager after a nine-game unbeaten run since arriving at the beginning of September.

One more own goal and they’ll have to forfeit the match pic.twitter.com/IjfjWfh3kz

Here is how SunSport’s Dylan Terry saw the performances of the Chelsea players.

KEPA ARRIZABALAGA – 5/10
Sold down the river for Brighton’s opening goal as he was left in a heap on the floor.

Could do very little about the two own goals as he was caught flat-footed for both of them – understandably so.

Came off at half-time for Edouard Mendy. Will be a concern for Chelsea fans given his impressive form since returning to the team.

Looked helplessly exposed down the right channel, partly due to the lack of help he was receiving from “wingback” Pulisic.

He then turned home a rather unfortunate own goal at the end of the first half, but it was symptomatic of his inability to cope with the runs coming from Brighton’s left.

An afternoon to forget for the young centre-back.

THIAGO SILVA – 4
It was a thoroughly eventful start for the Brazilian centre-back.

He produced two quite brilliant goal-line clearances to deny Brighton a very early opener – but moments later he then sloppily gave the ball away as Trossard handed Brighton the lead.

Looked as unorganised as the rest of the Chelsea defenders either side of him.

MARC CUCURELLA – 3
Safe to say Cucurella did not receive a warm reception on his return to the Amex.

But in the game he also suffered a torturous time as Solly March terrified him throughout, manhandling his former team-mate on the right flank.

Substituted for Chilwell in the 64th minute. A nightmare for the Spaniard.

CHRISTIAN PULISIC – 3
Missed a gilt-edged chance to pull one back when he sliced a rebound wide after Gallagher’s initial effort had been saved.

Was lucky to stay on the pitch for as long as he did. A passenger in the game for large parts.

Taken off for Broja with 11 minutes remaining.

CONOR GALLAGHER – 6
Pulisic’s miss will perhaps go down as the more embarrassing of the two, but Gallagher still HAD to bury the opportunity when faced one-on-one with Sanchez inside the penalty area.

Made much more out of a half-chance, forcing a superb save from Sanchez after a lovely headed flick-on.

Produced a delightful cross for Havertz to get them back into the match at the star of the second half, showing his quality with a wonderful delivery.

Replaced by Ziyech late on.

Much like in midweek, he always looked like the player who was going to make something happen for Chelsea.

Full of energy and a sublime passing range, Kovacic was the Blues’ standout man in an otherwise underwhelming display.

RUBEN LOFTUS-CHEEK – 4
A horrible moment for the midfielder as he turned into his own net to give Brighton a two-goal lead.

Appeared slow and off the pace throughout as Brighton played triangles around him.

Strangely looked more at home when he went to right-back for the second half.

MASON MOUNT – 6
Was very quiet in the first 45 minutes but looked a bit more threatening off the left of Havertz in the second period.

Still needed to do much more to impact the result. Found it difficult to slide passes into Havertz and Aubameyang as Brighton cut off the channels well.

RAHEEM STERLING – 4
You feel like you are repeating yourself over and over again when it comes to Sterling under Potter – but HE IS NOT A WINGBACK.

The England man is being tasked with playing deeper and helping support Cucurella on the left side of the Chelsea defence. But he failed to do so again on Saturday afternoon and also offered little threat in the final third.

Booked for a late challenge in the 50th minute and then hooked for Aubameyang shortly after the hour mark.

KAI HAVERTZ – 6
Looked quite lively in the first half but wasn’t given the service to capitalise on some nice runs in behind.

Took his goal in superb fashion, powerfully heading beyond Sanchez after a delicious cross from Gallagher.

Had a glorious chance to score a second late on but ballooned it well over the bar.

SUBSTITUTES
EDOUARD MENDY (FOR KEPA, 46) – 6
Had little to do but made a couple of solid stops to keep his side in the game.

Made two good stops before the fourth goal but couldn’t keep it out for a third time. Not his fault.

PIERRE-EMERICK AUBAMEYANG (FOR STERLING, 64) – 5
Doesn’t seem to be the type of player to dig you out of a hole off the bench. Failed to get up to speed with the pace of the game.

BEN CHILWELL (FOR CUCURELLA, 64) – 6
Looked much more assured on the left than Cucurella, although that isn’t saying much.

HAKIM ZIYECH (FOR GALLAGHER, 79) – 6
Came close to picking out the top corner from a free-kick but his whipped effort flew narrowly wide.

ARMANDO BROJA (FOR PULISIC, 79) – 5
Had very little impact. Failed to give Chelsea the aerial threat Potter would have been after.