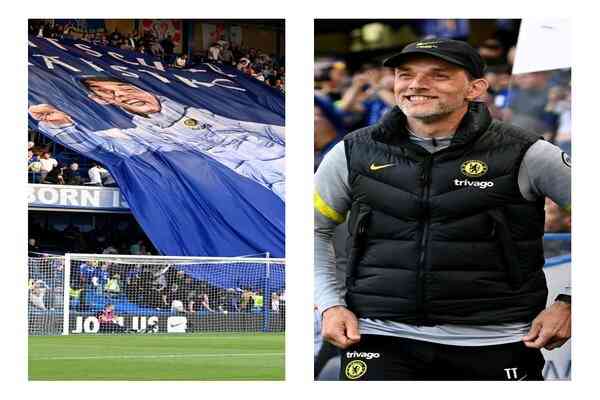 Chelsea manager, Thomas Tuchel was spotted in smile after seeing his new TIFO at the Stamford Bridge during their Premier League fixture against Leicester City on Thursday night.

The Blues came from behind to play a 1-1 draw against Leicester City at Stamford Bridge last night and secured a third place finish in the Premier League, thanks to a fine volley from Marcos Alonso.

However, after their 1-1 draw against Leicester City at the Stamford Bridge on Thursday, Chelsea has taken to Twitter to share thread of Thomas Tuchel reacting after seeing his new TIFO in the stands at Stamford Bridge last night. In the thread shared by Chelsea on Twitter, started with Thomas seeing his new TIFO in the stands before bursting into laughter.

Chelsea tweeted: “Stages of Thomas reacting to his new TIFO, a thread:” This thread from Chelsea of Thomas Tuchel reacting to his new TIFO has attracted reactions from fans, as some described the moment as beautiful, while some seems proud of him.

Here are some screenshots of reactions from fans: