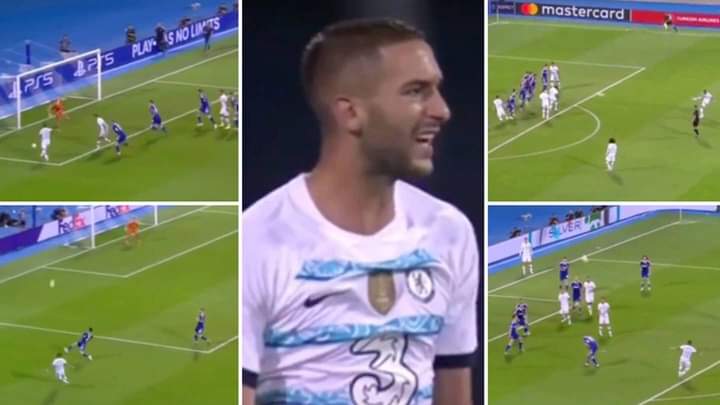 A compilation of Hakim Ziyech’s ‘disasterclass’ vs Dinamo Zagreb has gone viral on social media and shows the Moroccan is a shadow of the player he was.

Chelsea were beaten 1-0 in the Croatian capital, with Mislav Orsic rinsing new £70 million signing Wesley Fofana for the only goal of the game.

ZIyech was sent on at half-time in place of captain Cesar Azpilicueta in an attacking change as Chelsea looked to get back in the game.

But the 29-year-old did not make much of an impact at all and was well off the pace. His crossing was absolutely woeful during his time of the pitch and he also took two free-kicks that were both smashed straight into the wall.

Having came up with a first poor dead-ball attempt, Reece James wanted to take the free-kick Chelsea were awarded in the 96th minute.

Ziyech wasn’t having it though and James was absolutely fuming with his teammate, who didn’t even beat the wall with his second effort.

But he’s not been anywhere near that level at Chelsea since joining for a fee of £33.4 million.

Co-commentator Martin Keown said he was “out of sorts” on BT Sport’s coverage, while former Chelsea midfielder Joe Cole admitted he didn’t take his chance when he got it.

“Those players have come in tonight and haven’t taken their chance so at least he can tell them now that’s why they’re not playing,” Cole said post-match.

“Ziyech, he’s got a lot of talent but for one reason or another it’s not clicking for him at Chelsea.

“He wasn’t at his best and he hasn’t been at his best. He’s trying hard and trying to make things happen but it’s not happening for him.”

Ziyech was heavily linked with a move in the summer, with former club Ajax and Manchester United both named as interested parties.

It didn’t materialise and it remains to be seen how Ziyech will figure into the plans of Chelsea’s next manager after the club made the controversial decision to axe Thomas Tuchel.