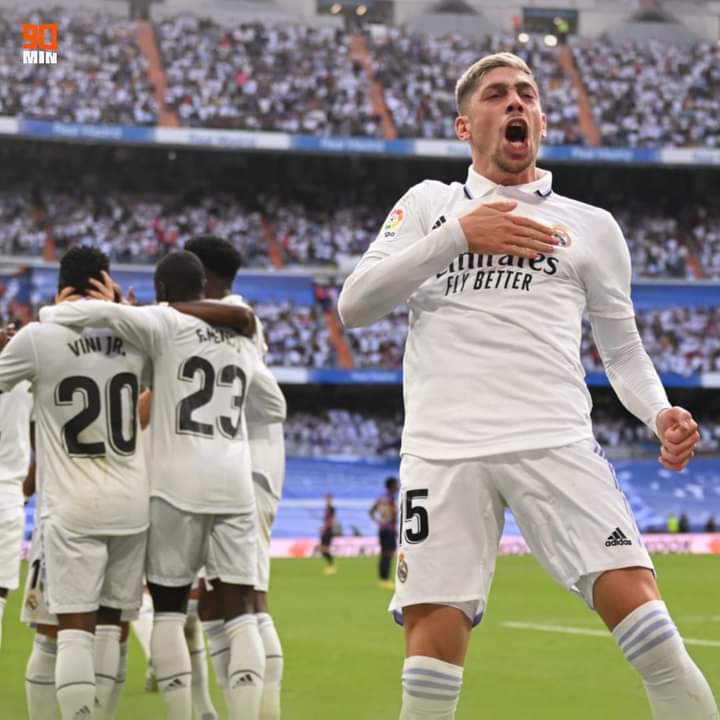 REAL MADRID 3-1 BARCELONA: Karim Benzema, Fede Valverde and Rodrygo all scored as Los Blancos secured a relatively straight-forward victory in the latest instalment of El Clasico and with it moved to the top of La Liga

Real Madrid snatched top spot in La Liga as they overcame Clasico rivals Barcelona 3-1 at the Santiago Bernabeu on Sunday.

The hosts seized the early advantage in the Spanish capital as French forward Karim Benzema got on the end of a ricochet to slot home the opener. Opposite number Robert Lewandowski spurned a glorious chance to equalise by somehow skying his shot on the stretch from only yards out.

That came back to bite Barcelona as Fede Valverde netted a sensational second from distance. Luka Modric thought he had notched a third for Real but his curling effort was ruled out by the offside flag. Barcelona threatened a late comeback through ex-Manchester City star Ferran Torres as he rounded off a brilliant move but in the end, his strike proved to be just a consolation.

Rodrygo rounded off the scoring late on from the penalty spot after drawing a foul from Eric Garcia. Here are the main talking points as Real Madrid claimed top spot in La Liga at the expense of their great rivals:

If front-runner Benzema wanted to put down a late claim for the Ballon d’Or, then there is likely not a more perfect game in which to do that than a Clasico. The Frenchman is currently among the clear favourites to take home the award for the first time in Paris on Monday.

It is certainly not hard to see why with the number nine having helped Los Blancos to La Liga and the Champions League last term. He turned in another sensational goalscoring display against Barcelona on Sunday having latched onto Marc-Andre Ter Stegen’s save from Vinicius Jr ‘s shot to score the opener.

Whether his display plays into any late voting decisions remains to be seen but it is tricky to see anyone but Benzema winning the Ballon d’Or.

Whilst Benzema continued his electric form on Sunday, the same cannot quite be said of Barcelona striker Lewandowski. Prior to the showdown at the Santiago Bernabeu, the Pole had notched an astounding 14 goals in just 12 matches in all competitions.

He looked sure to equalise as he got on the end of a wicked cross from former Leeds man Raphinha. Only yards out, Lewandowski was unable to convert – although to his credit he was at full stretch. Nevertheless, it will be a missed opportunity that he will be hugely disappointed with and one that could have changed the game had it been converted.

It always looked as though both strikers would certainly have been key to the way that El Clasico was going to go – particularly considering both the attacking and defensive statistics of each side.

Ahead of the match, Real were the second-highest scorers in the league – behind only Barcelona. In the meantime, the Catalan giants boasted the best defence in the entire division having conceded just one goal ahead of the trip to the Bernabeu.

Of course, one of those statistics was bound to fall to the wayside – Barcelona’s defence of course being breached more within 45 minutes than it had done in the previous eight matches of the campaign, something that is certainly indicative of the quality currently in the Real Madrid attack.

Former Manchester United target Frenkie de Jong made headlines ahead of the latest instalment of El Clasico following his claims that he was “pressured” to leave the club and was eyeing a starting berth against Real Madrid. Xavi heard the Dutchman’s appeals by handing him a place in the starting XI.

The former Ajax man flattered to decieve though as he failed to really get a hold of a Real Madrid midfield assembled by the likes of Modric, Toni Kroos and Aurelien Tchouameni.

Having been restored to the Barca team, De Jong could well be set to drop out once more following this performance.

Xavi calmed down after nightmare week

The defeat to Real has seen Barca relinquish top spot in La Liga. It also added to their problems with the Spanish giants all-but out of the Champions League courtesy of their dramatic draw with Inter Milan in midweek.

There was a fleeting moment where it looked as though the Catalans would have something to celebrate after Torres halved the deficit but it was not to be for Xavi’s side.

Xavi, his players and no doubt Barcelona supporters will be hugely disappointed at the result in Madrid but one other man who will be furious is Canadian rapper Drake.

Ahead of the game, he put on a huge bet worth in the region of £3.5million in winnings for Barca to overcome Real, whilst he was also relying on Arsenal finding a way past Leeds United at Elland Road. The Gunners of course held up their side of the bargain with a slender 1-0 victory, only for Barcelona to let the double down.

Whether he regrets agreeing to become Barcelona’s shirt sponsor for the match is a different question altogether.