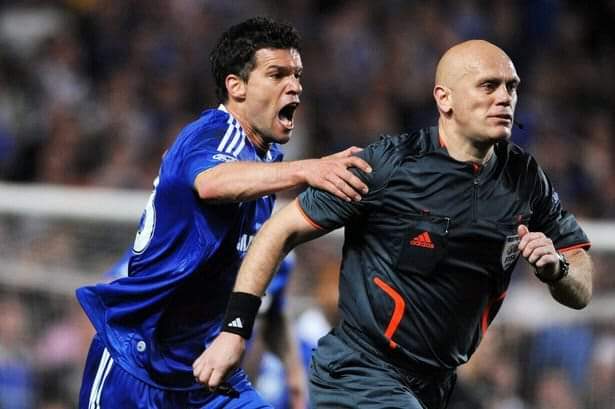 Utter Tom Henning Ovrebo’s name to any Chelsea fan and you’ll send a shiver down their spine.

It’s been exactly 13 years since he became public enemy number one at Stamford Bridge after controversially waving away four strong penalty shouts as the Blues were dumped out of the Champions League by Barcelona – courtesy of a 93rd-minute Andres Iniesta winner.

The image of the Spaniard wheeling away in ecstasy is a memory every Chelsea supporter will have tried desperately to supress, but as far as Ovrebo goes, they’ve refused to forget.

The Norwegian’s blundersome performance sparked all manner of conspiracy theories, and to this day many Blues fans are still convinced of his corruption, but after nearly a decade-and-a-half Ovrebo has finally admitted that he should have awarded Chelsea at least one penalty that night.

“I don’t think the Chelsea supporters are correct when they claim four of five penalties, but I think everybody that knows football and the laws of the game knows there should have been a penalty given,” he told the Daily Mail.

Michael Essien had given Guus Hiddink’s side an early lead with a thunderous volley from the edge of the box, but the visitors only needed to equalise to progress to the final. As such, Chelsea went hunting for a two-goal cushion, but found themselves battling more than just the Barcelona players to get it.

The first penalty appeal came when Florent Malouda was hauled over by Dani Alves just inside the box, though Ovrebo bizarrely decided to award a free-kick instead. Minutes later Chelsea were demanding another when Didier Drogba was wrestled to the ground by Eric Abidal, only for Ovrebo to wave play on.

Tensions began to rise around the ground as both Chelsea’s players and fans began to appreciate the delicacy of their advantage – and that tension turned to rage on 80 minutes as Gerard Pique slapped the ball out of Nicolas Anelka’s path in the box. Again, no penalty given.

The image of Ballack screaming in the official’s face, as well Drogba’s infamous ‘it’s a f***ing disgrace’ outburst after the match, encapsulated the incredible evening. Chelsea felt as if they’d been robbed in broad daylight, though Ovrebo insists that the players brought it on themselves in some ways.

“In a match like that when you have so many penalty appeals, sometimes as a referee you get concerned about not being fooled by the team. So maybe that could have influenced my perception in a negative way,” he said.