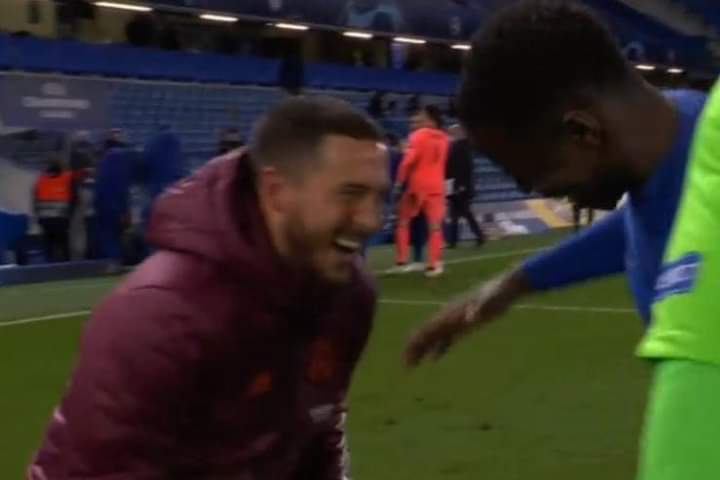 Eden Hazard angered Real Madrid fans and the Spanish media after he was seen laughing with his former Chelsea teammates after being knocked out of the Champions League.

And the reaction from Spain is so fierce that there are now claims he’s ‘on the market’ and ‘cannot stay for another second’.
Hazard was magical for Chelsea in his seven years at Stamford Bridge, but he was a shadow of his former self for Real Madrid on Wednesday evening.

The Blues delivered a stunning display to down the LaLiga giants at Stamford Bridge with 2-0 (3-1 agg) victory.

Timo Werner and Mason Mount’s goals sealed the deal for Chelsea but Real were lacklustre to say the least.

Hazard, who started the game, was one of those who failed to make an impact – and Real fans won’t want to see how he reacted to his side’s defeat at full time.

Hazard was spotted laughing with his old teammate Kurt Zouma following his no-show in the match.

And, predictably, it hasn’t got down too well back in Spain…
The reunion scenes have sparked a strong reaction from the famously ardent Spanish press – including outlet El Chiringuito TV, whose presenter looked close to tears as he reacted to the pictures of Hazard laughing and joking after being knocked out of the Champions League.

“Hazard at the end of the game is unacceptable,” was just some of the reaction translated from the channel. “We are angry, we don’t understand him. He can not stay at Real Madrid for another second.”

The former Tottenham man said on Thursday’s talkSPORT Breakfast: “Oh, don’t get me started… seeing that, when he’s laughing and joking after the game – you’ve just got beat!

“You’re at Real Madrid, probably the biggest club in the world, and they’ve paid £100m for you…

“Alright you’ve been injured, fair enough, but you’ve come back and you’re not fit, you’re miles off it…

“You’re laughing and joking after you’ve just got knocked out of the Champions League semi-final? Where’s your winning mentality gone?!

“Of course, it’s Zidane has played him, but when you walk off the pitch don’t start laughing and joking with the other team.

“They’re not his buddies, they’ve just mugged off his team! There are no mates on a football pitch.

“I just don’t agree with it. The game has changed, the winning mentality, the philosophy and how people act now, these young lads all being pals – get out of here!

“As if you two [Alan Brazil and Ally McCoist] would ever do that?!

“I got beat 7-2 in a five-a-side game the other day and I’m rowing with my mates, and that’s in a little mess around, a kickabout!

“You’ve got missed the chance to play in a Champions League final with Real Madrid and he’s laughing and joking! It shows your mentality as a person if you do that.”

“I agree with Jamie, I have to say,” added Rangers legend McCoist.

“It didn’t look good. I don’t even like the shaking hands before a game.