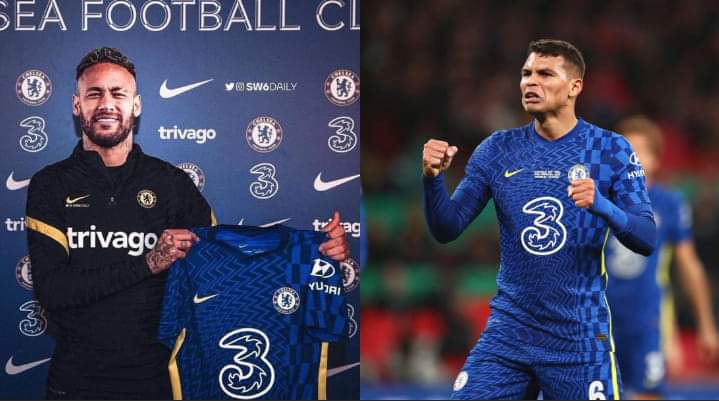 Chelsea defender Thiago Silva says Neymar ‘has to’ join him in west London, with Paris Saint-Germain reportedly keen to sell the superstar forward.

Neymar, who joined the French champions in 2017, is said to have been told he is not needed and the next mission is to get his high wages off the books.

They were also extremely successful together during their time at PSG
PSG club president Nasser Al-Khelaifi recently claimed the club wanted to move on from their model of recruiting big-name players.

He also recently stated: “A possible departure of Neymar this summer? What I can tell you is that we expect all the players to do much more than last season.”

Sky Sports are reporting that PSG are looking for a buyer for Neymar, who is said to be on £600k a week, with his contract running until 2026, although it’s claimed that a clause in the deal will trigger an extra year on July 1.

One potential buyer could well be Chelsea, who are looking at various forwards, including Raheem Sterling and Raphinha, since Todd Boehly’s takeover of the club.

And Silva told Brazilian journalists during a holiday back in his homeland that he would love to see his international colleague ane ex-PSG teammate join him at Stamford Bridge.

He said: “He has to go to Chelsea!

Neymar could be set to leave Paris this summer

INSIGHT Arsenal’s All or Nothing Amazon doc release date revealed as trailer drops
“If it happens, it will be for the best. He needs no comments. And on top of that, he’s a super friend.

“So far, I don’t know anything, but I hope it comes to fruition.”

However, talkSPORT’s Alex Crook has some disappointing news for Silva – he believes he’ll remain in the French capital.

“He’s on huge wages and that’s why they’re going to struggle to shift him,” Crook told talkSPORT.

Raphinha is reportedly closing in on a move to the Blues

Raphinha is reportedly closing in on a move to the Blues
“There’s a report in France where they’re clearly trying to push him out the door, saying the only clubs that could afford him were Manchester United, Chelsea and Newcastle.

“Absolutely no chance does Eddie Howe go for Neymar. He’s a million miles away from the player that Eddie Howe signs. Chelsea might just be crazy enough and I don’t see Manchester United going down that road with this rebuild they’ve got.