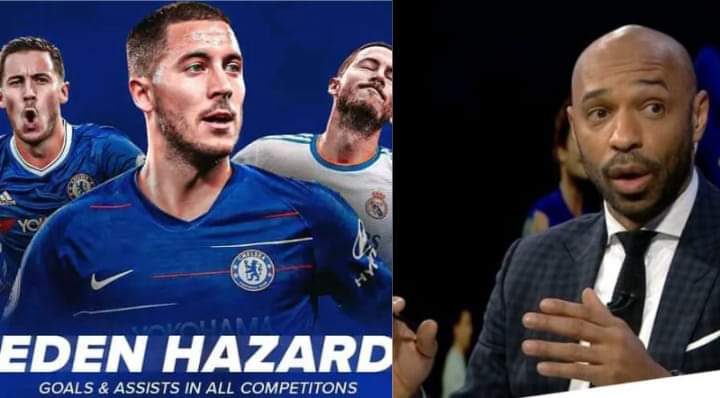 Thierry Henry has urged Christian Pulisic to improve his performances against defensive teams in order to match Eden Hazard’s level for Chelsea.

Pulisic scored Chelsea’s second goal in their 2-0 victory over Lille in the Champions League last 16 on Tuesday evening.

But the United States international, who was signed for £58 million in 2019, has struggled to make an impact this season, largely due to injury.

However, Henry believes Pulisic can raise his game by ‘unlocking’ tight defences in the same way Hazard used to do for Chelsea.

‘When I look at Pulisic and you see the clips, all of the clips [of his skills] are in transition,’ Henry told CBS Sports.

‘If you want to be big at this club, Eden Hazard could unlock something when the [opposing] team was low.

‘And I haven’t seen that with him yet. He can do transitions, yes.

‘But can he unlock it with a [Mohamed] Salah movement or, back in the day, Eden Hazard movement? I’ve not seen that yet.’

‘I tell you why I get frustrated because there’s four or five players for Chelsea who can play in the two positions behind the striker,’ said Carragher.

Technically, and moving with the ball, he’s the best player I’ve seen quality-wise. I just don’t see it enough.

And a lot of that, to be fair, is to do with his injury record. That is something that has to improve. I think he should be almost a certain starter in that position behind the main striker.

But as things are now I don’t think Hazard will love to come back to Chelsea after Roman Abramovich got sanctioned by UK Government with all his assets frozen, also Chelsea sponsor are suspending deal with the club.

Eden Hazard wants to return to Chelsea and is looking for possible ways to do so, Marca’s reputable Jose F. Diaz claims.

The Belgian is very likely to leave Real Madrid next summer.

It was previously reported that Madrid and Chelsea were in talks over a loan move for Hazard. The Whites are open to parting ways with the 31-year-old.

Eden joined us from the Blues in 2019 in a move worth €115m. The transfer has been widely regarded as a massive failure, as his spell at Santiago Bernabeu has been marred by injuries.

In total, Eden has only recorded six goals and 10 assists in 65 matches for Real Madrid.