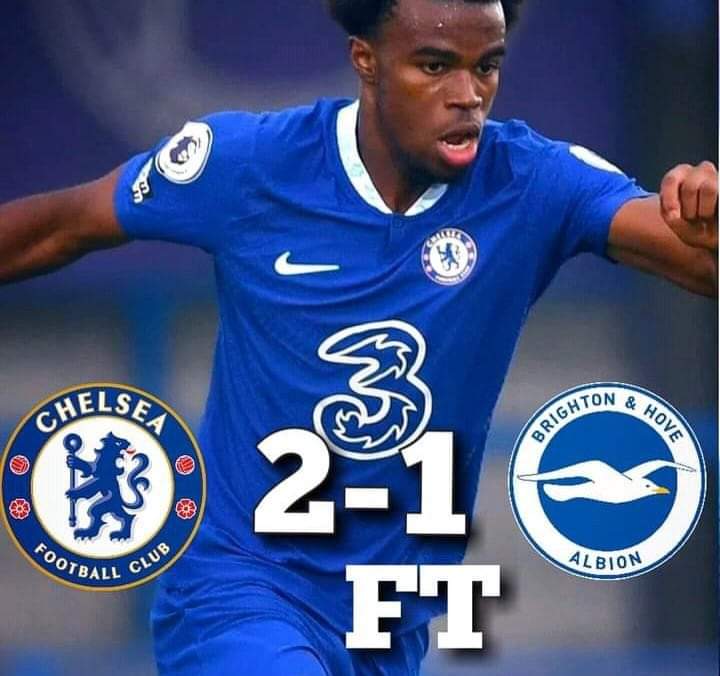 Graham Potter led Chelsea team were in action yesterday away from home against Brighton and Hove Albion at the Amex Stadium.

This was an organized behind closed doors friendly game between the two sides with the aim to keep the players fit after their games for the weekend were postponed due to unforseen contingencies, and it was a return for Graham Potter to face his former employer and what an awesome atmosphere it was.

The English tactician secured the win of the night which was a good omen after his managerial debut and first game in charge of the Blues ended in a disappointing one all draw against Red Bull Salzburg in the match day 2 of the UEFA Champions League.

The game ended two goals to one at full time with the Chelsea’s new boy and summer signing, Carney Chukwuemeka netting the two goals for the Blues.

Here are three players that performed brilliantly for the Blues in the thrilling encounter:

The 18 year old Nigerian-descent and England international was the hero and saviour of the night for the Blues where he scored a superb and stunning brace which was an indication that he could be the missing attacking midfielder needed in the squad at the moment despite his young age. His top notch performance in the game suggests why he should be given a role to play in the team whether as a starter or coming off the bench.

The England international and academy graduate was also phenomenal in the game as he played his part and also contributed his quota in the three-goal thriller.

He was at the heart of the centre-field where he made some clinical touches to help his team got the ball advanced upfront coupled with gaining more of the ball possession. The former Borussia Dortmund star was also superb at the heart of the forward line where he also made some dangerous moves that made him a complete threat in the opposition box with his impactful minutes spent on the pitch of play.

This was a great development to see how other players would perform instead of test running them in a Premier League match, with the ultimate part of it being to keep the fitness up to avoid match rusty noting the fact that Chelsea have no match to play until October 1st when they will be facing Crystal Palace at the Selhurst Park. Other players who featured in the game are Ruben Loftus-Cheek, Trevoh Chalobah, Armando Broja, Denis Zakaria among others as they will all be hoping to keep the tempo and momentum going in their next game as they continue their pursuit in the competition.