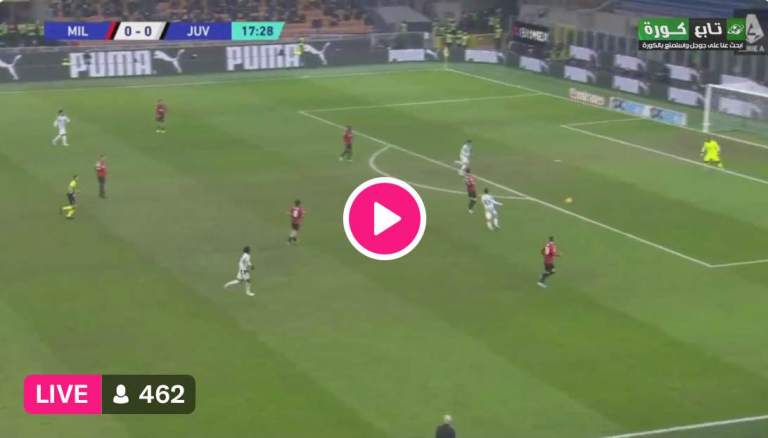 The pressure is on AC Milan as they face Juventus at the San Siro on Saturday. The Rossoneri will need the points to stay keep up with city rivals Inter and stay in the hunt for this season’s Scudetto. Follow our guide below as we explain how to watch an AC Milan vs Juventus live stream watch as Italy’s two biggest teams go head-to-head in this Serie A glamour clash.

Currently second behind Inter, AC Milan lost ground in the race for the Serie A title in controversial circumstances on Monday.

Stefano Pioli’s men were denied a goal in stoppage time against Spezia that would have given them the lead, with their opponents then dramatically scoring moments later to seal an unexpected 2-1 win.

Juventus have meanwhile responded well to the disappointment of their recent Supercoppa final defeat, notching up wins over Udinese in the league and Sampdoria in the Coppa Italia. Currently nine points behind league leaders Inter, a defeat would almost certainly kill off the Turin’s side’s faint hopes of winning the title.

Read on as we explain how to watch an AC Milan vs Juventus lives stream and watch all the Serie A action from the Italian top table of football.

AC Milan vs Juventus live stream: how to watch Italian soccer in the US

US Broadcast rights for Serie A and the Coppa Italia are now with Paramount Plus .

The service is also offering a FREE seven-day trial for new customers, meaning you can watch this game for free.

Alongside Serie A, the platform also has live broadcast rights for Champions League, Europa League and Europa Conference League as well as a host of other sports and TV shows too.

You can watch through a web browser or on the Paramount Plus app available on most smart devices.

Outside of the US? Residents of the country can connect to the same subscription services they pay for at home wherever they are – all that’s needed is a reliable VPN.

If you’re away from home and can’t bear to miss out on AC Milan vs Juventus, don’t worry. While you may initially encounter a problem watching your usual domestic live stream coverage in the form of geo-blocking, there’s an easy solution to this common annoyance.

It’s called a VPN and it’s a clever bit of software that relocates your device back to your country of origin – thereby allowing you to regain access to the services you normally use (and almost certainly pay for) back home.

ExpressVPN – get the world’s best VPNWe’ve tested all of the big VPN services and we rate ExpressVPN as the best of the bunch, thanks to its speed, ease of use and strong security features. It’s also compatible with just about any streaming device out there, including Amazon Fire TV Stick, Apple TV, Xbox and PlayStation, as well as Android and Apple mobiles.

Sign up for an annual plan now and get an extra 3 months absolutely FREE. And if you change your mind within the first 30 days, let them know and they’ll give you your money back without a quibble.

Once you have it downloaded and installed, just go ahead and open the VPN app, hit ‘choose location’, and you’ll virtually transport yourself back home – it really is that easy. Then you’re ready to watch your Serie A live stream of choice wherever you are in the world.

BT Sport is the new home of Italian top flight football in the UK, and is showing select matches live from every round of the action across its channels, including Saturday’s  match at the San Siro.

Coverage of this big game begins on BT Sport 3 at 7pm GMT.

Subscribers can watch BT Sport online, either directly through its website or by using the BT Sport app – available for iOS and Android as well as on consoles, Apple TV, Now TV devices, and select Samsung smart TVs.

For those who don’t want the commitment or cost of a full-fat BT Sport subscription, there’s now a BT Sport Monthly Pass option, which let’s you pay £25 and cancel whenever you want. That makes it the ideal option if you just want to give BT Sport a try or know you won’t want it for a full year.

Whatever length contract you choose, you also get the benefit of BT Sport’s Premier League, Premiership rugby, exclusive UFC live streams and much more.

If you’re outside the UK right now and want to watch one of this week’s Serie A games, don’t worry about geo-blocks on your account – simply grab a VPN and follow the instructions above to live stream the action just as you would if you were at home.

Fox Sports now has the rights to televise live top flight Italian football Down Under for the 2021/22 season, including this AC Milan vs Juventus clash.

if you don’t have Fox as part of pay TV package, your best option may be to sign up for the fast-emerging Kayo Sports streaming service with comes with a two-week FREE trial.

You can cancel at any time and it gives you access to over 50 other sports including the cricket, NRL,F1… the list goes on! Handy if you don’t want to go all out on Fox.

After that, the Kayo Sports Basic Package costs $25 per month and allows users to stream across two devices simultaneously. The service also offers a Kayo Sports Premium Package, which provides three concurrent streams for $35 per month.

Don’t forget, you can take your coverage abroad with you as well. For those wanting to watch home coverage of sports from overseas, a good VPN is the solution.

Star Sports has the rights to show the 2021/22 Italian Serie A season in India and will showing this potentially crucial game live.

As with all Serie A games on Star, this match will be available to watch live via the Star Sports TV channels or by getting a Disney+ Hotstar Premium streaming subscription which is priced at just 499 rupees for a year of the mobile only plan or 1,499 rupees for its Premium package that lets you watch across up to four devices and makes 4K available.

This package will also give you access to everything that’s great about Disney Plus – Marvel! Pixar! The Simpsons! Hamilton! Mulan! More! – as well as all of Hotstar’s content.

Those wanting to live stream games on the move will need to use the Hotstar app – available via the web, Android, iOS, and Apple TV.