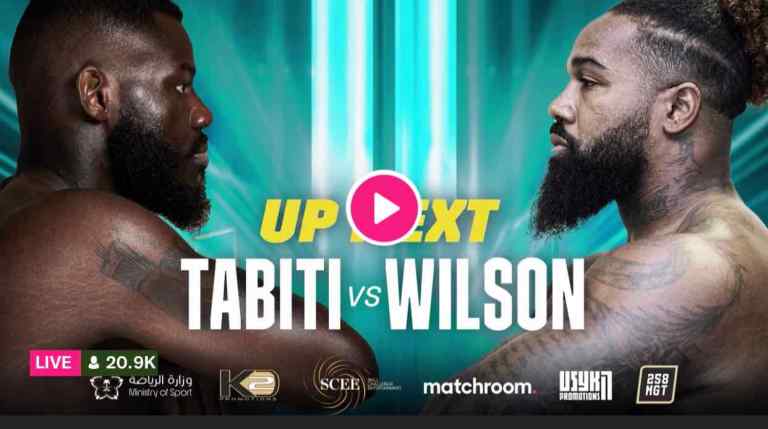 On Saturday, August 20, inside the Jeddah Superdome, Jeddah, Saudi Arabia, Andrew Tabiti will face James Wilson in a heavyweight bout scheduled for eight 3-minute rounds. This will be the 21st fight of Tabiti’s career but only the 9th of Wilson’s. Ahead of the big clash, here is a look at the stats and the other numbers that tell us more about the two.

The two, Andrew Tabiti and James Wilson, will fight on the undercard of Anthony Joshua vs. Oleksandr Usyk II, and likewise, there is anticipation concerning their bout.

Here is what the stats tell us about both Tabiti and Wilson.

Tabiti is at present 32 years old and he is an orthodox fighter. He goes by the alias ‘Beast’ and stands 6′ 1″ tall. Tabiti usually fights in the cruiserweight division and has a reach of 76½″/ 194cm. So far, Tabiti has fought 20 bouts and 93 rounds total. His professional record comprises 19 wins, 1 loss, and 0 draws. 15, that is to say, 75% of his victories come by the way of a knockout. His last fight was in May this year and he had fought Shamarian Snider, a bout he won by TKO.

Standing firm in the opposite corner, James Wilson is a heavyweight boxer who also goes by the alias ‘The Beast‘. As opposed to Tabiti, he stands 6′ 0″ tall. So far, he has had only 8 bouts and consequently just 25 rounds in total. His professional record consists of 7 wins, 0 losses, and 1 draw. In another astonishing similarity, 75% of his victories also come by the way of a