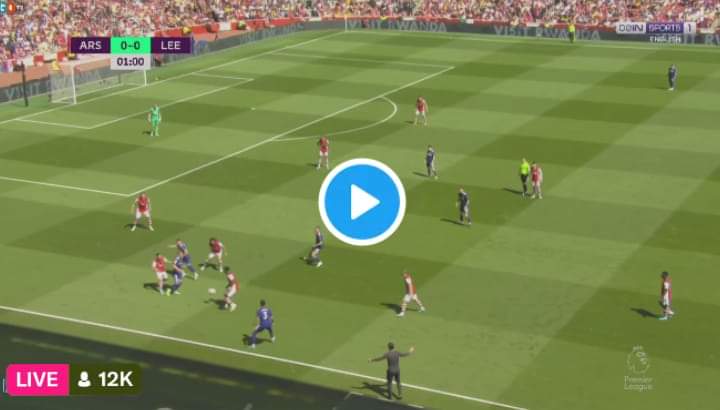 Leeds looked like they’d pulled themselves out of the muck a few weeks ago, but they’re right in the thick of it again. Jesse Marsch’s men face an Arsenal team that’s back on form and in the top four. With a potentially season-defining clash in midweek, Mikel Arteta’s men can’t afford to slip up again. Both sides are desperate for three points, so read on to find out how to watch Arsenal vs Leeds online and get a Premier League live stream, no matter where you are in the world today.

Leeds press with more gusto than anyone in the division, but there are few teams more accomplished at beating the press than Arsenal.

As numerous opponents have discovered to their advantage, if you manage to navigate the waves of pressure at the top of the pitch, what you’ll tend to expose is an extremely soft center. Man City’s 4-0 victory last weekend laid bare why Leeds have the worst defensive record in the division, and the in-form Eddie Nketiah, who was on-loan at Leeds a couple of years ago, should be looking to exploit that.

Arsenal’s slick forwards have taken plenty of plaudits this season, but it was the center-backs who did the business a week ago, Rob Holding and Gabriel Magalhães grabbing the goals in a hard-fought 2-1 win over West Ham.

Can they solidify their Champions League credentials? Follow our guide to get an Arsenal vs Leeds live stream and watch the Premier League online from anywhere.

How to watch Arsenal vs Leeds in the US without cable

NBC is the official US broadcaster for the 2021/22 Premier League season, and it shows every match across NBC, USA Network, CNBC and its streaming service Peacock.

Arsenal vs Leeds kicks off at 9am ET / 6am PT on Sunday morning, and is being shown exclusively on USA Network.

If you don’t have the channel on cable, streaming service Sling TV is reasonably priced and includes USA Network as part of its Sling Blue package. The usual cost is $35 a month, but you can currently get your first month of Sling TV for half price.

If you subscribe to Sling or any other US streaming service and find yourself unable to access coverage because you’re out of the country, remember the VPN solution outlined above – of the many options, we rate ExpressVPN as the best of the best.

How to watch Arsenal vs Leeds from outside your country

If you’re abroad right now and struggling to tap into your local coverage of the game, you’ll want a VPN. This’ll help you circumvent the geo-blocking that will try to stop you watching an Arsenal vs Leeds live stream in particular parts of the world.

They’re a useful means of getting around this issue, are cheap, and easy to set up as well. Here’s how it’s done.

Use a VPN to watch Arsenal vs Leeds from anywhere

ExpressVPN is the world’s top VPN
We’ve put all of the major VPN services to the test and we rate ExpressVPN as the absolute best of the bunch. It’s compatible with loads of devices including iOS, Android, Amazon Fire Stick, PlayStation, Apple TV and such, and we found it secure, speedy and simple-to-use.

Another great perk is the fact that it comes with a 30-day money back guarantee and 3-months FREE, so you can see if it’s right for you with no strings attached.

Once you’ve downloaded the software, just follow the prompts to install it then select the location you want to relocate your IP address to – it really is that easy.

Arsenal vs Leeds is being shown exclusively on Sky Sports in the UK, via the network’s Premier League and Main Event channels. Coverage starts at 1pm BST, ahead of a 2pm kick-off.

Sky Sports subscribers can watch this game on the go on mobile devices via the Sky Go streaming service, which has dedicated apps for iOS, iPadOS and Android devices, along with Xbox and PlayStation consoles.

If you want to sign up, you can check out our dedicated guide to Sky TV deals and packages for today’s best prices.

For those who don’t fancy being locked in to a long, expensive contract, consider the more flexible streaming option, Now, (formerly Now TV).

Those outside the UK wanting to watch their Premier League coverage can just pick up an ExpressVPN trial for 30 days and follow the instructions above to safely live stream the action.

Arsenal vs Leeds live stream: how to watch Premier League online in Canada

Streaming service DAZN is the sole rights holder for live Premier League games in Canada and will be showing every single match, including Arsenal vs Leeds, which kicks off at 9am ET / 6am PT on Sunday morning.

DAZN costs just $20 per month or there’s an annual subscription for $150, which gets you all the games plus Champions League and Europa League action, huge boxing events, snooker, NFL, and much more.

DAZN is a great option for anyone wanting to watch the Premier League from Canada. It’s a slick service with comprehensive Premier League coverage and a range of handy apps for iOS and Android mobile devices as well as Amazon Fire TV, Android TV, Chromecast, Apple TV, and most modern Smart TVs.

How to watch Arsenal vs Leeds: live stream Premier League game in Australia

Optus Sport has exclusive rights to show every single Premier League fixture this season live Down Under, which makes it the place to watch Arsenal vs Leeds in Australia. The game kicks off at 11pm AEST on Sunday night, so brace yourself for a late one.

You can stream Optus Sport coverage via your mobile, PC or tablet, and can also access the service on Fetch TV, Chromecast or Apple TV.

Anyone who isn’t already signed up to the Optus telecommunications network can take advantage of subscriptions to Optus Sport from AUS$14.99 per month, and can be accessed via Google Play or the App Store.

If you’re outside Australia and want to tune in to Optus Sport, you can use one of the top VPNs and watch the coverage from another country.

How to watch Arsenal vs Leeds: live stream in New Zealand

Streaming service Spark Sport has the rights to show the EPL in New Zealand for the 2021/22 season. It also offers a 7-day free trial so you can watch Arsenal vs Leeds at no extra cost. Kick-off is scheduled for 1am NZST on Sunday night/Monday morning.

Once that free trial’s expired, you’ll get coverage of Premier League games this season for the reasonable price of $24.99 a month. You also get a bevvy of Black Caps and England cricket matches and NBA basketball action from the US.

Spark Sport might not win any design awards any time soon, but it’s good value, straightforward, and offers Premier League fans everything they need to watch the EPL without cable.

Star Sports subscribers in India can watch Arsenal vs Leeds and the rest of the 2021/22 Premier League season live – either via the Star Sports TV channels or by getting a Disney+ Hotstar Premium streaming subscription from just 499 rupees for a year of the mobile only plan or 1,499 rupees for its Premium package that lets you watch across up to four devices and makes 4K available.

Arsenal vs Leeds kicks off at 6.30pm IST on Sunday evening.

Those of you wanting to live stream games on the move will need to use the Hotstar app – available via the web, Android, iOS, and Apple TV.