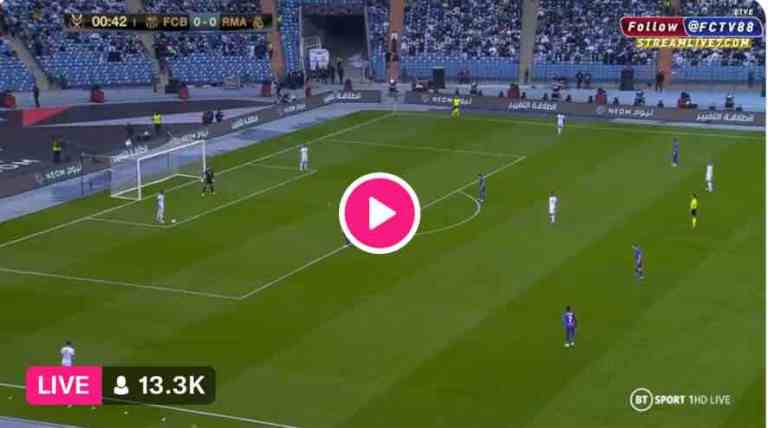 Barcelona vs Real Madrid – even when it’s played 3000 miles away from Spain, El Clasico is always one of the biggest events in the football calendar, and a Spanish Super Cup semi-final adds a little extra spice. This season’s competition is being held in Saudi Arabia, but both teams will take this game as seriously as any other, with a place in the final at stake. Make sure you know how to watch a Barcelona vs Real Madrid live stream wherever you are in the world.

New signing Ferran Torres is fit and starts for Barcelona after his move from Manchester City, with Luuk de Jong and Ousmane Dembélé joining the 21-year-old in attack. There’s a familiar face at right-back, with the returning Dani Alves retaining his place after impressing in the 1-1 draw with Granada at the weekend.

Toni Kroos, Luka Modric and Casemiro form a familiarly formidable midfield for Real Madrid, while David Alaba misses out having picked up a knock. Nacho fills in for the experienced Austrian and Lucas Vázquez drops to the bench to make way for Dani Carvajal.

Barcelona’s recent troubles both on and off the pitch will mean Real Madrid go into the game as favourites, especially considering they currently hold a 17-point lead over their great rivals in La Liga. Karim Benzema and Vinícius Júnior have scored more goals this season than the entire Barcelona team combined.

Form goes out the window for derby games, though, and Barça will be hoping the change of scenery works in their favour. Can Xavi’s work-in-progress side take a big step towards a record 14th Supercopa title?

It’s a 7pm GMT kick-off (2pm ET) today, Wednesday 12th January, at the King Abdullah Sports City Stadium in Saudi Arabia. Where else? Read on to find out how to watch a Barcelona vs Real Madrid live stream wherever you are in the world.

Those in Australia can watch Barcelona vs Real Madrid on SBS On Demand – a free streaming service that has the rights to air the Spanish Super Cup semi-final.

SBS is only available within Australia, but if you’re an Aussie stuck in the UK or elsewhere outside your home country, you can access a Barcelona vs Real Madrid live stream from anywhere – and watch the match free – using a VPN.

Here’s how to use a VPN…

Even if you have subscribed to the relevant Spanish Super Cup rights holders, you won’t be able to use them when outside your own country. The service will know your location based on your IP address, and will automatically block your access.

A Virtual Private Network (VPN) helps you get around this obstacle. A VPN creates a private connection between your device and the internet, and saves you money. What’s not to like?