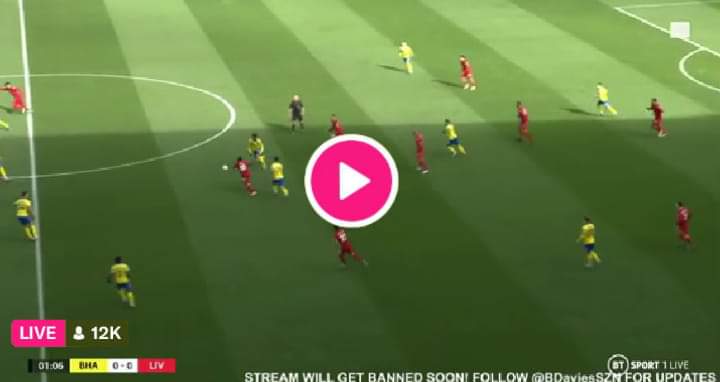 Brighton vs Liverpool live stream – Brighton and Liverpool game is an intriguing game at the Amex on Saturday (watch live, 7:30am ET on Peacock Premium) as the Seagulls aim to get back on track but face the red-hot Reds.

The Seagulls have not been soaring in recent weeks as they’ve lost four-straight games and have dropped from ninth in the table to 13th. Graham Potter’s side continue to play lovely stuff but they are now lacking that cutting edge in the final third and they’ve scored just once in their last four outings. They lost at Newcastle last time out but it was an improved display from the South Coast club. After such a fine start to the season, Potter will want his side to regroup and finish strong as they aim for a first-ever top 10 finish in the Premier League. Brighton did stun Liverpool earlier this season as they were 2-0 down at Anfield but rallied back in the second half to draw 2-2.

Liverpool are flying right now and have won seven on the trot in the Premier League to drag themselves into the title race, as well as winning the League Cup and reaching the UEFA Champions League and FA Cup quarterfinals. Jurgen Klopp has very few injuries and his squad is deep and fired up, with Luis Diaz, Sadio Mane, Mohamed Salah and Diogo Jota being rotated expertly up top. Defensively Liverpool looked a little shaky in their narrow home win against West Ham last week and after their home defeat to Inter Milan in the UEFA Champions League in midweek (they went through 2-1 on aggregate), Klopp will want to see his side cut out sloppy defensive mistakes. If they want to maintain their title hopes, they really can’t afford any slip ups before they face Manchester City in early April. Ahead of this trip to Brighton, Klopp gave an intriguing update on Salah’s contract situation and suggested that Liverpool have offered all they can to the Egyptian superstar and he must now make his decision.

Here’s everything you need to know ahead of Brighton vs Liverpool.

Adam Webster remains out with a hip injury, while Jeremy Sarmiento and Enock Mwepu are both on their way back to full fitness and could feature. Neal Maupay and Danny Welbeck are expected to start up top for Brighton.

Roberto Firmino could play some part after his recent groin injury, while Ibrahima Konate is expected to be fit after picking up a knock. It will be intriguing to see who Klopp starts in attack as he continues to rotate Diaz, Jota, Salah and Mane.