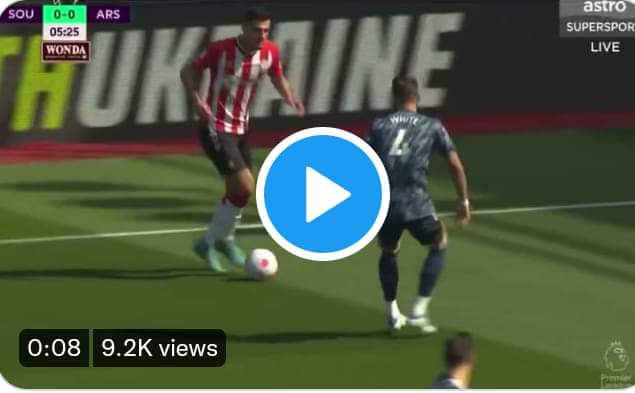 It came early on in the match with one of Southampton’s first forays into the Arsenal half, with the Albanian striker on the ball on the left wing.

He was stared down by Ben White but had total confidence in his ability, and for good reason. He took the ball into the Arsenal box and to the byline before cutting back on himself.

More Arsenal defenders surrounded the Slough-born attacker but Broja once again turned, taking the ball back to the touchline and moving it out of the way of Arsenal’s defenders with some good close control.

He was then able to send a cross in, nutmegging Cedric Soares as he did so, although the ball just missed one of the Southampton players hanging in the box.

It has been suggested that Broja will return to Chelsea next season and compete for the starting striker spot with Romelu Lukaku and Kai Havertz.

“Armando’s getting better and better, he’s a very unique player with unique strengths in his game, he has speed, he’s robust and he’s a goalscorer,” Chelsea manager Thomas Tuchel has said.

“First of all, now is not the moment to discuss the summer, it’s the moment for him to stay calm and keep on improving.

Former Chelsea wing-back and Broja’s Southampton teammate Tino Livramento has also been full of praise for the 20-year-old.

“I’ve been really impressed with him. Sometimes when young players go on loan, especially in the Premier League, they come off the bench and he’s bided his time a little bit but when his chance came he took it with both hands.”

Southampton won 1-0 courtesy of a Jan Bednarek first-half strike, with Fraser Forster making a number of saves to deny Arsenal an equaliser.