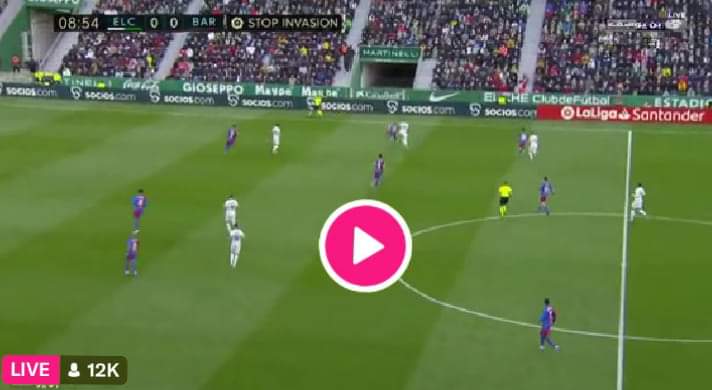 Here’s all you need to know about a meeting between this pair.

Alongside the suspended Gumbau, Elche are expected to be without Javier Pastore. The former Paris Saint-Germain man has only made five starts all term and is carrying a muscle injury.

Right-back Helibelton Palacios has missed the last two matches with a hamstring concern that leaves his involvement doubtful.

The raft of options at Xavi’s disposal going forward has reduced the crushing pressure on Ansu Fati to force his way back from a hamstring injury early. However, that hasn’t stopped the ambitious youngster dreaming of a return sooner than the one scheduled for late March.

Alejandro Balde has been placed on a similar recovery trajectory as he nurses a hamstring injury but fellow left-back Jordi Alba has served his suspension. Samuel Umtiti isn’t likely to shake off a problem with his foot until April.

Sergi Roberto has been sidelined by a tendon injury since October but is creeping closer to a return.

A 3-2 win at Camp Nou in December extended Barcelona’s unbeaten run to 18 consecutive La Liga matches against Elche. However, it wasn’t entirely straightforward.

A quick-fire double from Tete Morente and Pere Milla not only levelled the score at 2-2 but ended a 43-year wait for Elche to find the net in a top-flight match against the Catalans.

Nevertheless, Elche haven’t beaten Barcelona in La Liga since Melenchon scored the only goal in a victory against Johan Cruyff’s Blaugrana in 1974.

Francisco has managed to haul Elche away from the relegation scrap by picking up points against the sides around them. Aside from Friday’s anomalous loss to Levante, the incoming manager has only been beaten by Real Madrid, Sevilla, Valencia and their upcoming visitors.

Barcelona’s run of seven games unbeaten is the club’s longest all season as Xavi seems to have overcome some of the teething problems he endured upon his initial return to the club – even if the recent victories have been misleadingly emphatic.