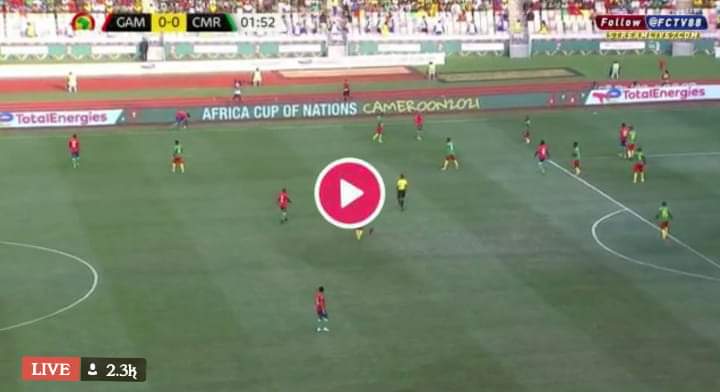 Gambia vs Cameroon live stream– Hosts Cameroon are out to seal a spot in the Africa Cup of Nations semi-finals against the Gambian side today.

Now, the 33rd edition of the AFCON has seen all manner of shocks and surprises emerge, particularly Gambia’s stunning campaign in their tournament debut.

Unbeaten thus far and having overcome Guinea in the round of 16, Gambia are riding the crest of a wave.

Cameroon, on the other hand, will almost certainly lick its lips. While Comoros’ valiant effort in the previous round was admirable, few would argue that facing one of the smaller footballing nations for a semi-final spot is what the hosts would have preferred.

Of course, this isn’t to say it won’t be difficult, but the Indomitable Lions couldn’t have asked for a better set of ties.

The Stade omnisport de Douala (otherwise known as the Japoma Stadium) in Douala will host.

Where to watch Gambia vs Cameroon

TV channel: The game will be broadcast on DStv Channel 202, Gotv Channel  31,   BBC Two and Sky Sports, although the exact channel is to be confirmed.

Live stream: Both the BBC Sport website and BBC iPlayer will provide a live stream, as well as Sky Go (available to Sky Sports subscribers).

Live blog:  You can follow all of the action through  Ejes Gist Live match blog.

As it stands, no major changes are expected from either side, though it’ll be interesting to see whether Cameroon look to go on the offensive again.

Having seen Gambia prove dangerous on the counter, António Conceição could look to drop an attacker in place of more defensive solidity.

As wonderful story as the Gambian campaign has been, it’s impossible to look past a Cameroon win on home soil.

Gambia vs Cameroon Head to head (h2h) history and results