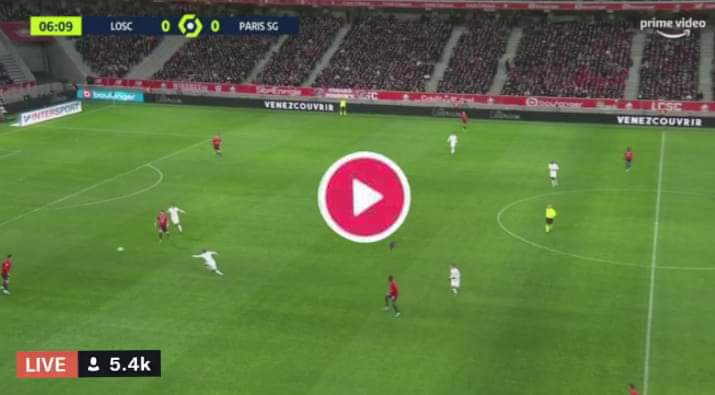 Lille vs PSG live stream – PSG will be eager to bounce back from their shock Coupe de France exit in midweek when they travel to face reigning Ligue 1 champions Lille.

The pressure on Mauricio Pochettino’s position as PSG manager increased when his side were dumped out of the cup at home to Nice on penalties after 18-year-old Xavi Simons spurned the decisive spot-kick.

Lille have put on a meek defence of their title after the departure of manager Christophe Galtier in the summer, although they will be keen to put a dent in PSG’s procession to the Ligue 1 title as the Parisiens sit 11 points clear at the top.

Lille are still reeling from the loss of wide man Jonathan Ikone to Fiorentina in the January transfer window as they endeavour to climb the league table in the second portion of the season.

Hatem Ben Arfa made his debut for Les Dogues in their defeat to Brest last time out, with the Frenchman having signed a deal until the end of the season.

The former Newcastle winger could be in line for a start this weekend, with Jocelyn Gourvennec boasting a full complement of players.

Sergio Ramos’ persisent calf issues have flared up again, meaning the Spaniard is a doubt for the trip to Lille this weekend.

Elsewhere, Abdou Diallo and Idrissa Gueye will not be available due to their continued involvement with Senegal in the Africa Cup of Nations, while Gini Wijnaldum has been ruled out through injury. Neymar, meanwhile, remains a long-term absentee.

PSG have won just two out of their last five meetings against Lille, tasting defeat against Les Dogues in the Super Cup final back in August.

Lille’s march to the Ligue 1 title last season also included a 1-0 win at the Parc des Princes through a Jonathan David strike, although they blew a huge opportunity to register back-to-back wins in the French capital in October.

David edged the reigning champions ahead against Pochettino’s men, but a late rally from PSG – through goals from Marquinhos and Angel Di Maria – turned the game on its head in the last 15 minutes.

With a crunch Champions League knockout tie with Real Madrid looming on the horizon, PSG must correct their alarming domestic form.

Although they boast a near-unassailable lead at the top of Ligue 1, it is difficult to defend Pochettino after his expensively assembled squad bowed out of the Coupe de France on home soil.

Lille will provide a stiff test despite their turbulent form this campaign, and it could be a game where PSG’s lack of cohesion is exposed once again.