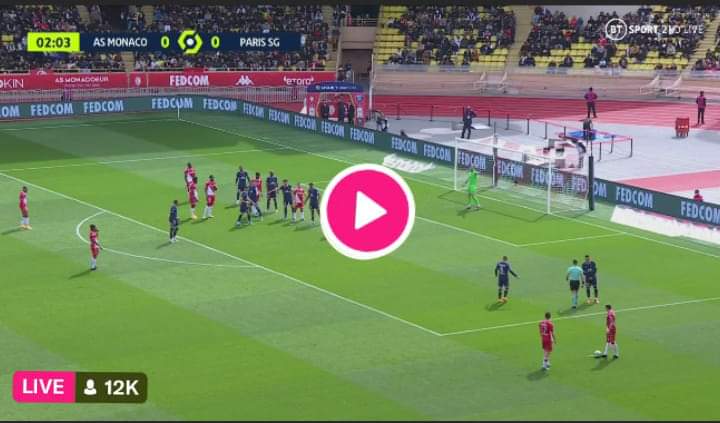 Monaco vs PSG live stream – Know the live streaming details about the AS Monaco vs Paris Saint-Germain, Ligue 1 match, scheduled to be played at the Stade Louis II Stadium on Sunday.

In a pivotal game in the Ligue 1 standings, Paris Saint-Germain (PSG) will be up against AS Monaco in the Ligue 1 2021-22 match at the Stade Louis II Stadium in Monaco on Sunday. The current Ligue 1 standings toppers PSG, will miss the services of Argentine football superstar Lionel Messi in Sunday’s game, as he is ruled out of the match due to flu-like symptoms. However, PSG will be hopeful of recovering from the Champions League 2021-22 exit that they suffered last week.

Meanwhile, PSG head into the match after earning a 3-0 win over Bordeaux on March 13. The home side for Sunday’s match-up face PSG after returning with a 1-1 draw in the Leg 2 of Round of 16 stage in the Europa League in the last match. Monaco suffered a 0-1 loss to Strasbourg in their last Ligue 1 match on March 13.

Ahead of the clash, PSG has won two of their last five matches across all competitions while Monaco has won only one match out of their last five games. At the same time, PSG has won three out of their last three matches, playing against Monaco. Both teams last faced each other on December 12, 2021, when PSG defeated Monaco by 2-0. In the meantime, PSG currently sits at the top of the Ligue 1 points table with 20 wins, five draws, and three losses from 28 games. On the other hand, Monaco currently sits ninth in the table with 11 wins, eight draws, and nine losses from 28 games.

Indian football fans can watch the Monaco vs PSG, Ligue 1 match, on the live broadcast by Viacom 18. In order to watch the live telecast of the match, fans can tune in to the Colors channel. TV5 Monde will also telecast the match on selective DTH operators. Fans can enjoy the live streaming of the match on Voot Select and Jio TV. The match is scheduled to start at 5:30 PM IST on Sunday.

How to watch Monaco vs Paris Saint-Germain, Ligue 1 match in the US?

Football fans in the United States(US) can watch Monaco vs PSG match by tuning in to the beIN Sports USA. The match will be streamed live on FuboTV, which comes with a free trial. The match is scheduled to start at 8:00 AM in the US on Sunday.

How to watch Monaco vs Paris Saint-Germain, Ligue 1 match in the UK?

Football fans in the United Kingdom(UK) wondering how to watch Monaco vs PSG match live, can tune in to the live telecast by BT Sport. The live streaming of the match will be available on the app of BT Sport. The match will start at 12:00 PM on Sunday in the UK.