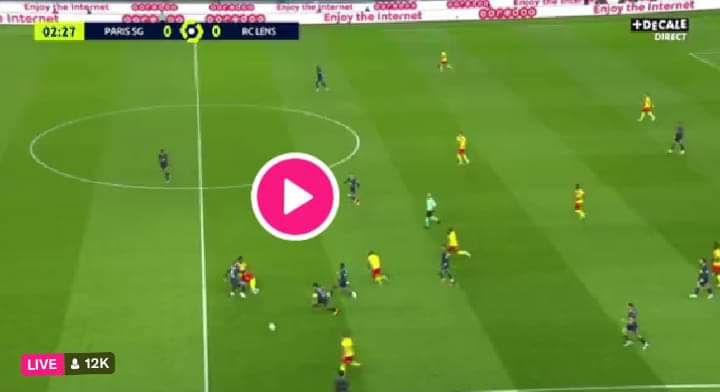 PSG vs Lens live stream – Paris Saint-Germain could seal their 10th Ligue 1 crown with victory this weekend as they welcome Lens to the Parc des Princes.

Marseille’s second-half comeback at home to Nantes in midweek kept the champagne on ice for Les Parisiens, as they cantered to a 3-0 triumph over Angers.

The result made it four wins in a row for Mauricio Pochettino’s side, and they face a Lens outfit who harbour European ambitions of their own after three straight victories

PSG could be without Lionel Messi for this weekend’s potential title-decider after the Argentine reported an Achilles problem on the eve of his side’s win over Angers in midweek.

Similarly, Marco Verratti and Presnel Kimpembe are also injury doubts, although Pochettino is hopeful of welcoming back Julian Draxler, Layvin Kurzawa and Ander Herrera before too long.

Franck Haise can call upon a relatively healthy squad as Lens continue their improbable push for European football next season.

Jonathan Clauss continues to impress on the right-hand side this season, although he hasn’t found the net since the end of February.

Last weekend’s 2-1 success over Marseille in Le Classique all but secured the Ligue 1 title for Pochettino’s side, although they will be keen to get it over the line in front of a restless home crowd.

Marseille ought to have nicked a point through a late William Saliba leveller that evening, but PSG did just enough via their gifted attacking trio in the first half to make it an uphill struggle for their opponents.

With Pochettino’s future in doubt, it becomes difficult to plan for next season, but a strong ending to this campaign is the least PSG owe their supporters.