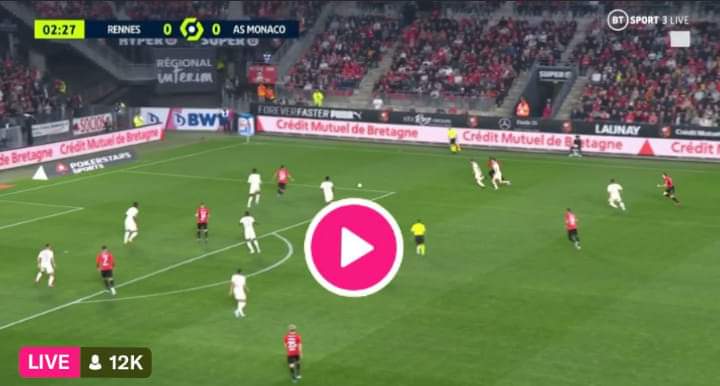 Roazhon Park in Brittany will be the site of a critical Ligue 1 fixture between Rennes and Monaco, who are each vying for a place in Europe next season.

Stade Rennais come into this contest on Friday unbeaten in their previous five matches in all competitions, while Les Monegasques have won their last three domestic encounters and are only a single point behind Nice for a place in the Europa Conference League.

Winning the league is probably out of reach, but nonetheless Bruno Genesio and his team are on pace for a record-setting top-flight campaign, with 56 points after 31 fixtures, equalling their highest-ever tally at this stage of the competition in 1998-99.

Throughout 2021-22 they have been incredibly potent in the final third, scoring 67 goals, three fewer than league leaders Paris Saint-Germain.

Their deep attacking side have been extremely clinical on home soil, scoring 20 goals domestically at Roazhon Park in their previous five games played there, while conceding just two.

Rennes have only competed in the Champions League group stage once before (2020-21), and at the moment, they find themselves with a chance to guarantee they make it back to at least that point next season, currently trailing Olympique de Marseille by three points for second place.

Genesio has always been enamoured with attacking football, and the slick collective style of play that he has brought to this side seems to be what they needed to reach the next level.

Les Rouge et Noir have effectively executed a preventative marking style when they hit the field, an approach that focuses on anticipating the loss of a ball to counter the opponent quickly.

When Monaco were knocked out of the Europa League last month, it appeared as though that would be the last European match we would see them play until at least the 2023-24 campaign.

Since their exit from that competition however, their fortunes in the league have changed dramatically, with Philippe Clement‘s side currently on their longest winning run since he took over, sitting two points behind Strasbourg for a place in the qualifying portion of the Europa League next season.

In what has been a tumultuous campaign in the principality featuring a team that have been hot and cold, Les Monegasques seem to be finding their footing in the nick of time.

While they have done what is needed to pick up three points in each of their previous three encounters, it has not been easy, as they narrowly defeated relegation-threatened sides Metz and Troyes, both times by a 2-1 score.

Their individual class has carried them through numerous matches, and that quality will be put to the test over the next seven days as they face two teams (Rennes and Nice) who stand in their way of a return visit to European competition.

Those upcoming encounters could determine their European fate, and Les Rouges et Blancs will fancy their chances against Stade Rennais, a side that they have defeated 49 times in Ligue 1, more than any other top-flight opponent.

Benjamin Bourigeaud notched a brace last week, but Martin Terrier ended up being the hero for Rennes as his 58th-minute strike was enough to earn his team a 3-2 victory over Reims last weekend.

Les Rennais are likely to be missing Jeremy Doku because of a calf issue, while goalkeeper Alfred Gomis has a broken finger which will see him on the sidelines once again.

Loic Bade is nursing a groin strain, Kamaldeen Sulemana continues to recover from a back problem and Jeremy Gelin will not be available until late April at the earliest with an ACL injury.

Rennes have 11 players who have scored multiple goals domestically this season, thanks in large part to the quality service provided by their playmakers, including Gaetan Laborde and Lovro Majer, who are tied for fifth in Ligue 1 with eight assists, while Bourigeaud has 11, two fewer than Lionel Messi for second place.

A sumptuous free-kick from Monaco left-back Caio Henrique put them on the front foot a week ago, while some fine work down the left flank by Aleksandr Golovin and Youssouf Fofana enabled Kevin Volland to fire home the winner in the second half.

Guillermo Maripan is out until late April with a knee injury, and Krepin Diatta will not return this season after suffering a torn ACL.

Despite failing to score in their previous encounter, Wissam Ben Yedder is making a solid case for why he deserves a place on the French World Cup squad this November.

The Monaco striker has three goals in his last three league games and is tied with Terrier for second in that department, two back of former Monegasque forward Kylian Mbappe in the race for the Golden Boot.

There is a lot at stake for both teams heading into this encounter, and they each have plenty of game-changers capable of producing moments of brilliance that can turn one point into three.

We should see some firepower from both teams, but given the magnitude of this game, we do not expect Monaco or Rennes to take too many risks going forward late in the match.