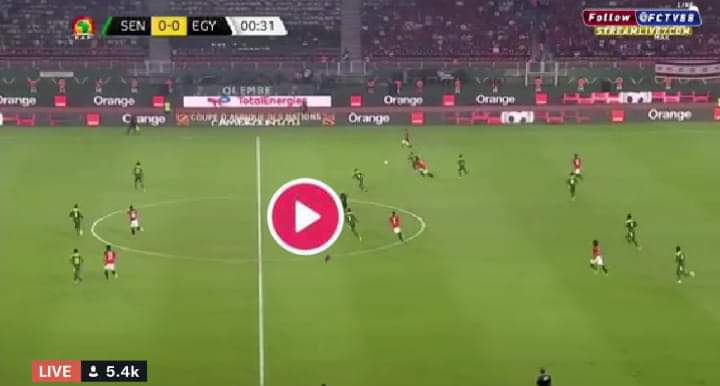 Senegal vs Egypt live stream – Both Senegal and Egypt plan to make history on Sunday when these two teams face in the final of the African Cup of Nations at Olembe Stadium in Yanoundé.

Once signed up for FuboTV, you can watch Senegal vs Egypt live on the FuboTV app, which is available on your Roku, Roku TV, Amazon Fire TV or Fire Stick, Apple TV, Chromecast, Xbox One or Series X/S, Samsung TV, LG TV, any device with Android TV (such as a Sony TV or Nvidia Shield), iPhone, Android phone, iPad or Android tablet. Or you can watch on your computer via the FuboTV website.

If you can’t watch live, FuboTV also comes with 250 hours of cloud DVR space, as well as a 72-hour look-back feature, which allows you to watch the match on-demand within three days of its conclusion, even if you don’t record it.

There is one storyline that stands above the rest: Salah vs. Mane. Both the hopes of these two countries lie on the shoulders of these two football giants and on Sunday over at Olembe Stadium in Yaoundé as the 53rd edition of the African Cup of Nations comes to a close.

For Senegal, this is the moment for them to finally end the curse of being the best team to have never won this competition. If there is a chance to beat them, Senegal is the squad that can pull that achievement off. This squad is playing in good form as they were one of the teams that did not have won the final after appearances in 2002 and 2019, the third time could be the charm under Aliou Cisse.

The Teranga Lions had less complicated tests given the opponents’ road to the final. After beating Zimbabwe 1-0 and two goalless draws with Guinea and Malawi to top their Group, Sadio Mané’s teammates defeated Cape Verde 2-0, Equatorial Guinea 3-1 then Burkina Faso by the same score in the knockouts.

Once again, you see the squad and Senegal look like a very stacked side from a talent standpoint. This will also see them rely on the vast experience of various players that are based in Europe. With players like Sadio Mane, Chelsea goalkeeper Edouard Mendy and Napoli defender Kalidou Koulibaly among others, if they click, they can be a team that will be extremely difficult to handle. This, especially for a team as defensively oriented as Egypt.

Egypt, in the meantime, were a team that suffered and looked to play in the mold and image of Carlos Queiroz. He is looking for his first continental trophy after coming up short on a couple of occasions with Iran. This would also be his first title at the senior level as he led Portugal to the U-20 World Cup back in 1991.

With the exception of the match against Nigeria, an encounter that saw them overmatched, Egypt did just enough to get through. The question is whether that will be enough to earn their eighth title.

One of the great questions in this final is how will the overall functionality of the team, promote the maximum performance from Mohamed Salah. So far, the striker’s performance is considered underwhelming as his presence with the team is based on his larger-than-life persona more than having a group of teammates that are able to constantly provide important passes his way.

Yet, the Liverpool star knows very well that he has a tremendous responsibility in a final of this nature.

“After a lost final in 2017 against Cameroon, we will play our all-out tomorrow against Senegal to grab the eighth star,” said Salah. We are determined to seek the crown. the players are physically and mentally ready. We are here to play the title and that means a lot to us. We want to offer a title to all Egyptian citizens.”