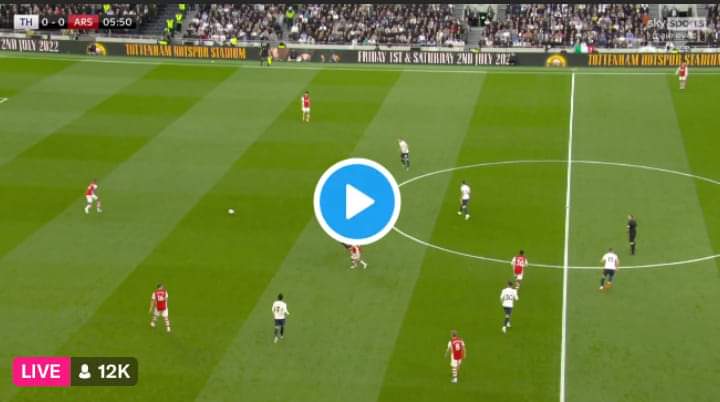 Tottenham vs Arsenal live stream – Arsenal travel to face Tottenham this evening at the Tottenham Hotspur stadium kick off time at 19:45 pm.

Having last qualified for the Champions League in 2016, Arsenal travel to Spurs knowing a win will secure their return to the competition after a six-year absence.

Both sides head into the final two weeks of the season with key absentees, including the known injuries at Spurs to Sergio Reguilon, Matt Doherty, Japhet Tanganga and Oliver Skipp who will all miss the remainder of the campaign.

Thomas Partey and Kieran Tierney remain injured for the Gunners, with neither appearing likely to appear again between now and the end of the campaign.

Meanwhile, Arsenal head up the Seven Sisters road with injury doubts to key players Ben White and Bukayo Saka, both of whom Arteta remained touch and go about their availability.

Spurs head into the derby knowing only a win will really do in keeping their top-four aspirations alive after a series of results that has seen Arsenal pull away.

Encouragement will come for Antonio Conte after his side’s impressive showing away at Anfield last Saturday in which his front three in particular caused the quadruple chasing Liverpool all sorts of problems on the break.

Despite four consecutive wins, Arteta will be wary of the threat Tottenham’s blistering front three of Dejan Kulusevski, Heung-min Son and Harry Kane can pose to his backline.

The absences of Doherty and Reguilon, both impressive since Conte’s arrival at the club last year, however, will surely settle Arsenal nerves.

Spurs should remain unchanged from their impressive draw at Liverpool, with Conte appearing to have settled on an XI that he somewhat trusts.

Arteta’s starting line up at the Tottenham Hotspur Stadium on Thursday evening is a little less certain than his Tottenham counterpart’s.

Saka, so crucial to Arsenal’s resurgence this season, is doubtful having picked up a knock against Leeds.

White, another player who has impressed for Arsenal this season, has missed their last two games with a thigh injury and Arteta remained coy on whether or not the England international will feature against Spurs.

Injuries aside, Arsenal’s front line has a little more flexibility to it than Spurs’. Gabriel Martinelli, who started ahead of Emile Smith Rowe in Sunday’s win over Leeds United, could drop out in place of the England youngster.

Eddie Nketiah’s goals in recent weeks have been crucial in steering Arsenal towards the Champions League and it would be a shock were he to be dropped in place of club captain Alexandre Lacazette.

Meanwhile, with Tierney absent Arteta has played around will his fullbacks in recent weeks. After struggling on the weekend at left-back, Thursday’s trip to Spurs could see Takehiro Tomiyasu return to his usual right-back spot and Nuno Tavares recalled on the left.