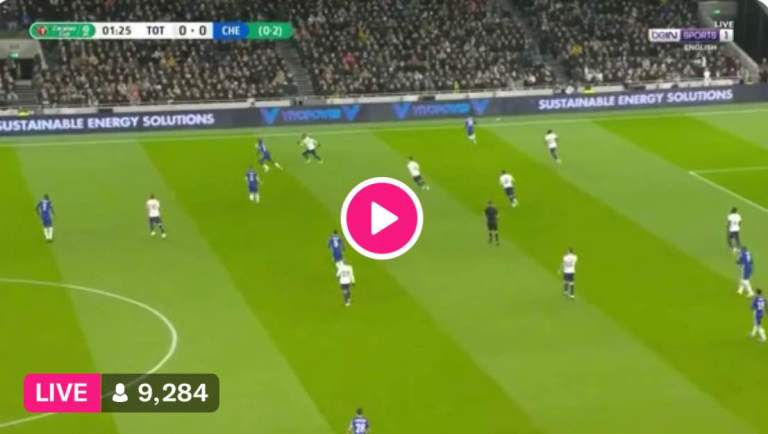 Tottenham vs Chelsea live stream – Hotspur manager Antonio Conte makes his return to Stamford Bridge for the first leg of his side’s EFL Cup semi-final with Chelsea on Wednesday night.

The Blues saw off Brentford 2-0 to reach the final four, while their North London counterparts ran out 2-1 winners over West Ham United in the quarters.

A challenging period both on and off the pitch for Chelsea seemed to reach boiling point during the visit of Liverpool, as Sadio Mane and Mohamed Salah put the Reds two goals to the good amid the tension surrounding Romelu Lukaku‘s comments from a recent interview.

However, the Blues rallied to rescue a 2-2 draw in a terrific advertisement for the Premier League, as a Mateo Kovacic stunner preceded an injury-time equaliser from Christian Pulisic, who had missed a gilt-edged opportunity to beat Caoimhin Kelleher earlier in the half.

That result did little good for either side’s hopes of catching runaway leaders Manchester City, but a shot at glory in the EFL Cup potentially awaits the Blues, who sunk Brentford 2-0 with a youthful lineup to book their place in the final four.

Chelsea’s performances have been far from vintage in the 2021-22 EFL Cup, though – needing penalties to overcome Southampton and Aston Villa at home after 1-1 draws – and the Blues sure have developed an affinity for stalemates at Stamford Bridge.

Indeed, four of Chelsea’s last five games on home soil have ended level – including each of their last three – and the Blues cannot expect to end that stalemate streak with ease against their former manager and proven winner.

Antonio Conte ought to receive a warm welcome when he steps foot onto the Stamford Bridge turf once again, but sentimentality will cease to exist as he attempts to gain the upper hand in this tantalising North London derby.

The EFL Cup certainly represents Spurs’ best chance to finally end their 13-year trophy drought – with their last piece of silverware coincidentally coming in the 2008 competition after beating Chelsea in the final – and they made it this far thanks to goals from Lucas Moura and Steven Bergwijn against West Ham.

Spurs had to rely on a last-gasp Davinson Sanchez header to get over the line against Watford on New Year’s Day, but they remain unbeaten domestically since Conte took charge, with the Italian the first manager in Tottenham’s history not to lose any of his first eight league games at the helm.

Victory at Vicarage Road represents Spurs’ only away win so far in the Conte era, though, and their last meeting with Chelsea in the semi-finals of the 2018-19 EFL Cup saw the Blues progress via spot kicks before defeat to Man City in the final.

Tottenham did manage to send Chelsea packing in the 2020-21 EFL Cup fourth round, but that win represents their only triumph from their last eight against the Blues, who eased to a 3-0 win at the Tottenham Hotspur Stadium in September’s Premier League clash.

Lukaku was dropped from the squad to face Liverpool at the weekend following his revealing interview but may return here following his apology, while Edouard Mendy is with Senegal for the Africa Cup of Nations.

It remains to be seen if Ruben Loftus-Cheek and Timo Werner will recover from bouts of COVID-19 in time to start here, but Trevoh Chalobah, Reece James, Ben Chilwell and Andreas Christensen are expected to miss out.

Kepa Arrizabalaga will return in between the sticks with Mendy unavailable, while Jorginho, Callum Hudson-Odoi and potentially even Saul Niguez can feel hopeful of featuring from the off.

As for Spurs, Steven Bergwijn, Cristian Romero and Ryan Sessegnon all remain out of contention, but Conte has no fresh injury concerns from the win at Watford.

The Italian may be forced into some rotation here given how hard he has worked his established first XI over the Christmas period, with Japhet Tanganga and Harry Winks both prime candidates to start.

Bryan Gil and Dele Alli could provide some fresh legs in the final third, while a lack of alternative options will once again see Harry Kane spearhead the charge.

Both sides were certainly made to work for their results in the Premier League at the weekend and fatigue could come into play, especially with Conte reluctant to alter his starting lineup recently.

The Blues should have at least one recognised striker available here, but while their run of draws at Stamford Bridge has to end at some point, we expect Conte’s resilient defence to withstand the onslaught and leave it all to play for in the second leg.

Our expert tipster partners  at Sporita.com are predicting over 1.5 goals in this match. to find out what else they are predicting for this game and for more of their tried-and-tested football tips.