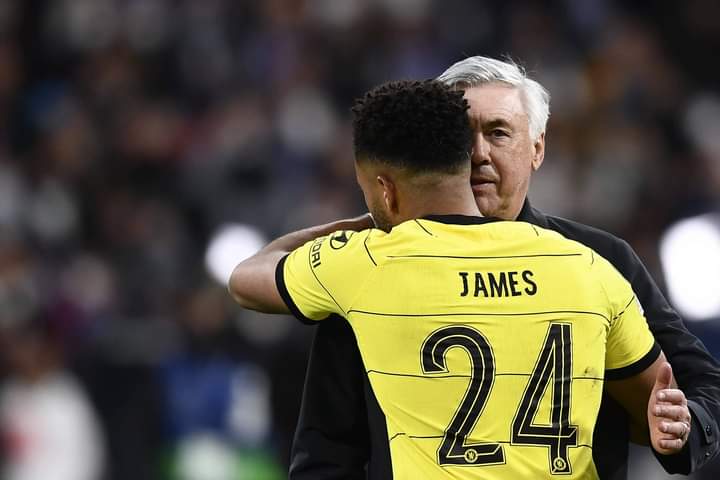 Real Madrid coach Carlos Ancelotti having a word with Chelsea right-back Reece James after their Champions League clash at the Bernabeu.

Chelsea fans have been left shocked after reports indicating that one of their star players had been placed on a high list of targets by one of Europe’s best clubs surfaced. It has now emerged that Spanish giants Real Madrid are targeting a move for defender Reece James after repeated scouting.

Madrid manager Carlos Ancelotti is planning to strengthen his team’s defence in the summer transfer window and has made the right-back a leading transfer target. Ancelotti is said to be ready to test Chelsea’s new owners’ resolve to keep the clubs highly rated asset.

In a report by The Mirror, the Italian’s scouting department closely scrutinized James’ performance over the two legs of the Blues’ champions league clash with the Santiago Bernabeu outfits. This means that Real Madrid have now watched the 22-year-old more than eight times this season.

With Ancelotti plotting a major overhaul of his squad, his technical team believe that Reece James would be the perfect fit for the right side of their defence. However, the La Liga Champions-elect need to get rid of a few players to free up funds for their summer transfer budget. James’ contract at the Stamford Bridge runs for another three years and, although Madrid know a move for him would prove too expensive, they believe he still has many years of progression ahead.