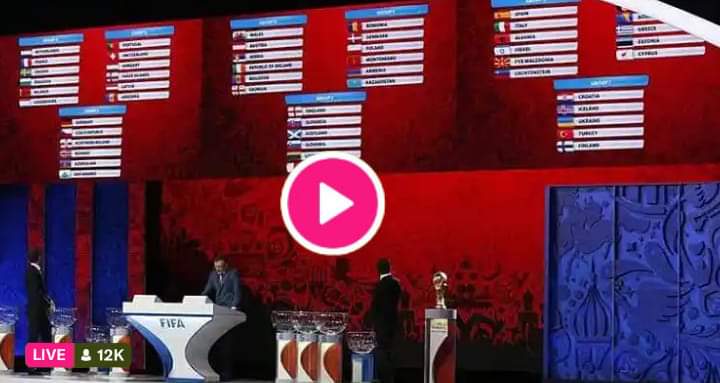 Qatar 2022 FIFA World Cup Draw live stream – Ahead of the biggest milestone of football’s flagship event fast approaches, the procedures for the Final Draw for the FIFA World Cup Qatar 2022 are now available. Fans and teams will find out their paths to possible glory on 1 April from 19:00 (local time), at the Doha Exhibition and Convention Center at which time 29 out of the 32 participants will be known.

The procedures approved by the Organising Committee for FIFA Competitions outline that the 28 already qualified teams will be allocated according to sporting principles to pots 1 to 4 based on the FIFA/Coca-Cola Men’s World Ranking released on 31 March following the conclusion of the international match window. As hosts, Qatar will take position A1 from Pot 1, where they will be joined by the seven highest-ranked qualified teams from the FIFA/Coca-Cola Men’s World Ranking.

The countries occupying positions 8-15 in the ranking of the qualified teams will be allocated to Pot 2, while the 16th-23rd best-ranked qualifiers will be placed in Pot 3. Finally, Pot 4 will include the qualified teams in positions 24 to 28, plus three placeholders representing the two winners of the intercontinental play-offs and the remaining UEFA play-off winner.

When is the World Cup finals draw?

Who has qualified for the finals?

How does the draw seeding work?

Hosts Qatar, ranked 52 in the world by FIFA, will take a place in Pot 1 as hosts, as is always the protocol.

The 28 teams to have qualified are then seeded in order of their FIFA World Ranking, using the latest published list which will officially be confirmed on Thursday, March 31.

The top seven countries will join Qatar in Pot 1, with the next eight in Pot 2, the following eight in Pot 3, and the five lowest-ranked countries in Pot 4.

Pot 4 will then be completed with the playoff paths that will decide the three remaining finalists in June.

Teams in the same pot cannot face each other in the group stage.

How will the draw work?

The draw will start with Pot 1, though it has already been established that Qatar will fill position 1 in Group A to play the opening game of the tournament. Qatar will have a different coloured ball to signify this, and it will be drawn first.

The rest of Pot 1 will then be allocated, one team in each group, in alphabetical order through to Group H.

The same process is then completed for Pots 2, 3 and 4. Each pot is drawn in its entirety before moving on to the next pot.

Are there any special conditions for the draw?

Yes, two countries from the same confederation cannot be drawn against each other — so United States cannot be in the same group as Canada, for instance.

The one caveat is Europe, which has 13 countries qualified so it is impossible to prevent a clash. Therefore, five groups will contain a maximum of two teams from UEFA.

The same condition will apply to the teams coming from the intercontinental playoff paths, which feature ties of nations from two confederations.

A computer will inform FIFA of any draw conditions which may be breached, which will result in the draw going out of group order for time to time (for instance, when drawing Canada for Group C, they may need to go in Group D as United States are already in Group C).

Why will there be 37 nations in the draw?

The two intercontinental playoff paths, and the postponed route from UEFA, were all due to be completed by the end of March, but are now scheduled for June.

The intercontinental routes were pushed back due to the coronavirus pandemic pausing qualifying across the globe and forcing a delay.

The remaining UEFA playoff path could not be completed after Ukraine were given permission to postpone their semifinal against Scotland due to Russia’s invasion of the country.

It means that Pot 4 will have placeholders for the eight teams still in contention for the three remaining berths at the finals. These placeholders will be known after qualifying finishes this week.

When will the fixtures be known?

Usually, the full schedule is known as soon as the draw is made, as A2 would play A4 in a set stadium at a set time. However, due to the size of Qatar, with no air travel needed to move between the venues, match dates, times and venues will be optimised for the benefit supporters, teams and the media both at home and in the host country.

For instance, if it makes sense for a Brazil game to kick off later for the South American audience, this will be taken into account.

The full schedule is expected to be announced in the hours after the draw on Friday.