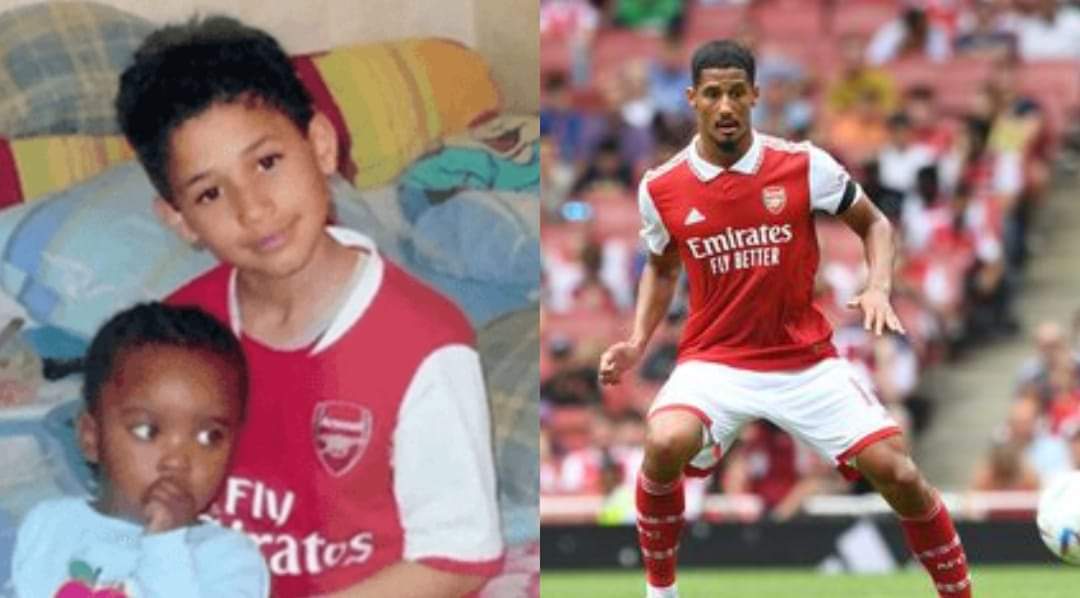 There’s a whole generation of footballers – especially from France – who grew up inspired by the magic of Thierry Henry. William Saliba, the only Frenchman in our first-team squad, was no exception.

Born in the north-eastern Paris suburb of Bondy in 2001, William grew up idolising the legendary Gunners forward, who would lead Arsenal out as captain five years later in 2006, in the Champions League final in the French capital, just ten kilometres or so from our No. 12’s hometown.

By then William was already football mad. He says he was inspired to take up the sport purely for his love of the game. Being able to play football full-time was all he ever wanted to do.

“When I was a kid I was always playing football,” he says. “I just loved football, from whenever I can remember. When I was three years old I wanted to become a professional footballer when I was older – it stayed as my dream for my whole life.

“It didn’t come from my family really, because they didn’t like football like I did,” he adds. “But they gave me a ball when I was a very small kid, and ever since that moment I was playing football. I didn’t really do any other sports – football was my favourite. I used to do athletics for a bit, just one year really, the sprint events, but I always played football, and joined a club when I was six years old.”

He says he loved watching it just as much as kicking a ball himself, and would watch the France national team at first – Les Bleus were reigning world and European champions when he was born. Soon he got more into club football. It was a golden time for Arsenal as well, of course, and it was a side with distinctly French flavour. Little surprise, then, that we soon became William’s favourite team.

“I had Henry on the back – he was the one I looked up to the most. I loved watching him. Arsene Wenger was the manager, so there were a lot of French connections with Arsenal. I remember watching the big Champions League games, against Barcelona I remember, but the other games too.”

Back then young William wanted to grow up to be just like Thierry. He may have since developed into one of the continent’s most promising young defenders, but he actually started out as a forward – maybe not surprising considering he was coached by Kylian Mbappe’s father at his first club.

“Where I’m from in France, everybody plays football,” he continues. “A lot of big footballers are from Bondy – Kylian Mbappe, Jonathan Ikone and lots of others, so people play a lot of football there. I wasn’t always a defender. I was a striker, all the way through the academy, until I was 12 years old. I played in midfield a bit as well, but I only became a defender when I changed club.

“I joined a club called Montfermeil and that was the age when we went to playing on a full-size pitch. The coach there said to me: ‘Let me try you at centre back,’ and from that moment I didn’t change.

“I was always tall for my age so I liked playing there, and I started watching defenders more and more to learn from them. I watched all of the top defenders, wanting to learn from all of them, and at that time especially Virgil van Dijk was somebody I looked at, to learn from his game.”

‘Wilo’ soon progressed to become spoken about as an outstanding central defender in his own right, and he was on the move again when he was just 15 – snapped up by Saint-Etienne, some 500km south of Paris. He turned pro aged 17 and was straight into the first-team in Ligue 1, making 16 appearances during his debut season.

That’s when Arsenal came calling, and we won the race for the highly-rated 18-year-old’s signature in July 2019. Despite interest from elsewhere at the time, William says it was an easy decision to make.

“This is a special club,” he says. “You know that when Arsenal is interested in you, you are going to be very happy. There was no decision to make – you don’t need to make a reflection – it was an easy choice. As soon as I knew Arsenal wanted me, I wanted to come here.”

However, arriving at Arsenal and playing at Arsenal proved to be two very different propositions. As part of the transfer, he was loaned back to Saint-Etienne for another season to continue his development. The plan worked wonderfully. He was a regular starter until injury brought his campaign to a premature end, but by then he had helped his side reach their first French Cup final since 1982.

At the end of the season he returned to the Gunners, by now under the management of Mikel Arteta, and his first involvement with the first-team squad was against Liverpool in the Community Shield at Wembley, albeit one where he watched our victory from the bench as an unused substitute.

It was a time of big change at Arsenal, with Arteta setting about remodelling the squad he had inherited, and there was no space in our 25-man squad for the young defender. So another loan spell back in France followed, this time at Nice, before he spent the whole of the 2021/22 season at Marseille.

His development continued apace in the south of France. There he made more than 50 appearances in all competitions, helped his side to the Europa Conference semi-final, assured Champions League qualification, was named Ligue 1 Young Player of the Year and also made his senior debut for France in a stunning year. Little wonder that Arsenal supporters were desperate to see him finally run out in the red and white this season.

“When I was on loan it helped motivate me every day knowing that Arsenal were watching me, were in touch with me, and that soon I would be back here,” he reflects. “My objective was always to come back and play here, so I knew I had to fight and work a lot while I was away from the club if I wanted to come back.

“Somebody from the club was in touch with me every week, giving me advice, encouraging me and I knew they were supporting me, even though I was in France.

“Also having the love of the fans behind me while I was on loan was very special for me and helped me a lot. I saw some of it on social media of course, and it made it easier for me to play. I want to give the fans something back now, to thank them for their support.”

He has been repaying them ever since making an impressive debut – some 1,107 days after signing – against Crystal Palace on the opening day. He started with a win at Emirates Stadium too, though he netted an unfortunate own goal against Leicester City in a 4-2 victory on his home debut, only to more than make amends away to Bournemouth in the following match. He scored a screamer with his left foot to add to his all-round defensive masterclass on the south coast.

It was also the day his chant was born: “I first heard the song during the first half, I was so happy. Very, very happy in fact, and it helped me a lot to be focused on the game. It was so good. After the game I walked over to the fans to say thanks, because they helped me all through that game.

“But even in the Leicester game, they were supporting me. The reaction after the own goal meant a lot to me, but I don’t say I was surprised by it, because I know how good the fans are here. I really appreciated it, though – it was great to hear.”

He says the reception has helped him settle in London, the first time he’s ever lived outside of France, although there are few aspects of English life that he’s still adapting to.

“The food!” he laughs. “The food is different, but it’s good as well here. But I’m from Paris, so London is not so different, it’s another city so I think it’s similar to France. The English people are different though, and I’m still getting used to the language, but it’s OK.

“My family have not been able to come and watch me play yet, just my friends so far, but my family will come soon, this month. I have one sister and one brother, and I speak to them all the time. They are happy with how it’s going right now – they love the song the fans have for me!”

Happy on the pitch and happy off it. Still only 21, there’s no question that William has a bright future ahead of him. His experiences growing up, and during three recent loan spells have all added to the overall package, but now is the time he wants to deliver for the club. His club.

“Yes, now I want to win everything,” he states. “I want to help the club to come back to the very top. I will give everything for this club to help us get back there.

“It has been hard for me as well at times at Arsenal, not playing all the time, but sometimes sport is like this. You don’t only have good moments – it’s part of life. That’s all in the past. Now I’m just focused on the present and on the future. I want to do my best for Arsenal and keep improving and working hard every day.”