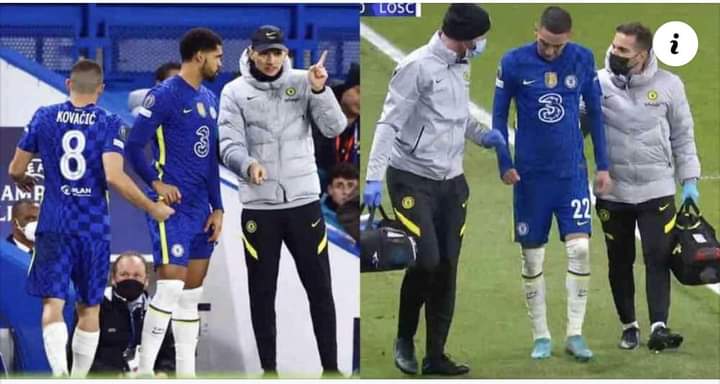 The West London based club Chelsea were the better side in the game and their total dominance led to their comfortable victory over Lille. The German Midfielder Kai Havertz scored the opening goal of the match while Christian Pulisic’s 69th minutes strike sealed the victory for Chelsea.

The English Premier League giants Chelsea would travel away to face Lille in their second leg encounter. The likes of Kai Havertz, N’golo Kante, Thiago Silva, Hakim Ziyech and Christian Pulisic were impressive as they got a comfortable victory over Lille.

Let’s take a look at the 3 latest updates about Chelsea;

1. KOVACIC’S INJURY UPDATE: The Croatian and Chelsea midfielder Mateo Kovacic suffered a thigh injury during their victory over Lille.

According to various reports, The Chelsea Midfielder Mateo Kovacic is likely to miss their next game against Liverpool. 2. ZIYECH’S INJURY NEWS: The Moroccan and Chelsea winger Hakim Ziyech also suffered an ankle injury during their 2 – 0 win over Lille.

According to various reports, The Chelsea winger Hakim Ziyech is a major doubt for their cup match against Liverpool. 3. SILVA’S FITNESS: The Brazilian and Chelsea Defender Thiago Silva had a minor injury despite playing the full 90 minutes in their crucial match against Lille.

The 37 years old defender is expected to recover fully ahead of their game against Liverpool.